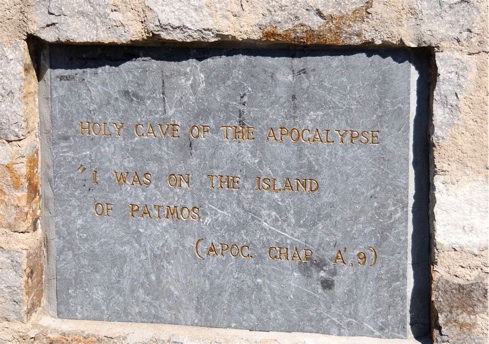 Patmos is a barbell shaped island not far from Turkey and so within a few hours of leaving Kusudasi, we arrived here. This is a sparsely populated place and totally different from Mykonos. Patmos is religious while Mykonos is secular. One is the island of God the the other is the island of Party. Patmos was the island of preference to exile dissident Christian leaders from Ephesus. St. John of gospel fame was the most famous resident sent to Patmos. And so this island has its origins in early Christian history. Today there is still a large monastery dedicated to St John. In fact even though the island is part of Greece, it is actually run by the local monks. The island is most famous for the

The Cave of St John and his massive monastery which looks more like a fortress than what I thought a monastery might look like. Even though the place is much older and authentic than the House of the Virgin in Turkey, spiritually, I did not feel much life or “juice” in this place. From an historical perspective, however, it is another story. The island is exciting! Between here, Ephesus and the House of the Virgin I am witnessing the birth of a new religion, at least from the Greek perspective. In the near by church there is a museum that is loaded with ancient manuscripts, liturgical vestments, sacred jewelry and other relics that I was amazed to see. Unfortunately no photos were allowed. They always do this. It seems that you can never photograph the good stuff, but I am sure these things are all available in books and on the Web. However, it is certainly exciting to personally see things and places. You gain a connection to these places that you can never get from a book or Web pages.

The first thing we did was to enter the cave of St John. Today there is a small stone building constructed over the cave. This cave is the spot where John apparently wrote the book of Revelations and perhaps even his gospel. Others say he wrote is gospel at Ephesus. In either case, I visited both places so I am covered. LOL Before I entered

I heard the usual hagiographic stories about cracks appearing in the cave as God sent John a sign of how to teach his new faith. Inside the cave, which is dark and rather ominous, we were shown these cracks where God “spoke” to John. In addition, I saw other holes and depressions that have religious interest. One was a head rest and the other was a hand rest. Today pilgrims file through in an endless stream kissing these sacred spots. It was all interesting, but really it did not move me. In the birth place of the Virgin I also heard the same types of miraculous stories but for some reason I was not bothered by them. But here I was. These days I am just closed to male driven religions, and as far as I can tell orthodox Christianity seems to be male dominated. Orthodox priests wear black robes and keep large beards, which makes them look authoritarian and commanding. I am just far beyond this things these days, whether it is shaven heads or big beards. Such things do not impress me. But it was good to see.

The look of an orthodox church, especially inside, is beautiful! Gold covers everything and their use of icons comes close to the Hindu idea of murtis, so I feel comfortable with this aspect of orthodoxy.

The monastery high above the cave is ancient and formidable. On the way up there is a beautiful church that includes the museum that I mentioned. Oh the things that I have seen! This museum holds an amazing collection of ancient manuscripts and sacred vestments. Anna, I am honored and humbled to have been able to visit this place. It was also interesting to hear the stories how the island was constantly attacked by pirates and how the monks defended themselves with walls and small doors and how they poured boiling oil from the top of walls on the pirates. Apparently these ancient walls have never been penetrated by pirates and any other attackers. It was all very practical and amazing to see. I enjoyed my visit to Patmos.