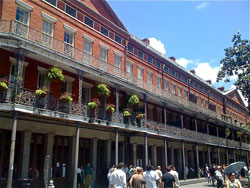 I arrived in New Orleans in the late afternoon of Friday, May 22 and took a taxi to the downtown Hilton near the French quarter. I had come to New Orleans to perform a wedding, and in my mind was prepared to see a poverty stricken and backwaters area of the country, which had been devastated by hurricane Katrina. My ride from the airport only confirmed my expectations: I witnessed endless rows of trashy wooden housing, window bars, graffiti, broken pavement and titled utility polls. “Just get me safely to my hotel; I will hold up there, get the wedding done, and then get out of this wasteland.” These were my thoughts. 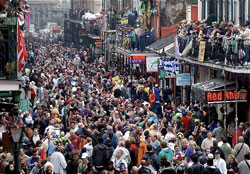 When I arrived downtown everything was changed. It looked like a typical city-center where I could at least walk about during the day, but once in the hotel, I was told that I could walk safely anytime of the day and that I was only minutes from the Mississippi River and the French quarter. ”This city is open 24 hours a day. Enjoy yourself!” This was the advice of my concierge. So I unpacked, showered, orientated myself and set out for a walk as “le flaneur de la ville” (the city stroller, with nowhere in particular to go). Once on the streets I found that New Orleans was anything but dead or depressed. In fact it was teeming with life and activities. There were hordes of tourists, street bands, minims, sidewalk venders, and cafes all open for my pleasure and business. Jazz music and dance were everywhere. I began my exploration with a walk along the Mississippi, up the river towards the French district. It was wonderful to see the paddle wheelers and steam boats crisscrossing the river. I was reminded of Huckleberry Fin. The river was calm and serene, and very wide. My first stop was at the Café du Monde for some famous french donuts (beignet) and coffee. Just on the street close to where I was sitting I was serenaded by a musician playing an electric saxophone. I ended up purchasing her CD.

New Orleans is filled with french names and french culture, but nobody speaks French! What a shame. I was reminded of the Quebecois who mandated French inside the province of Quebec in Canada, and while at the time, I thought this was heresy verging on insubordination, I now know that without legislation there would be no french spoken in North American today. I am glad French has been preserved at least in one place. Having been to Europe I am not intimidated by multiple languages. French speaking Canada is an asset to North America. I wished it was still spoken here.

Bourbon Street: What I found on this Friday evening of Memorial Day weekend was an absolute melee of drunkenness and debauchery mixed with ecstatic song and dance. There is a reason it is called Bourbon Street! How can I forget the procession of the naked lady throned upon a steer being paraded down the street followed by a convoy of garbage trucks to the accompaniment reveling singers? Bourbon street extends for miles with street bands, bars, strip clubs, and parades hosted by intoxicated celebrants and onlookers. The upper floor of the buildings that line the street have balconies that are also filled with reveling party goers, who rain down feathers, glass beads and beer on the scene below. You do not walk down Bourbon Street, you are pushed down Bourbon Street by the crowd, and as you pass each den of iniquity you are greeted by a cadre of sound, color, smoke and nakedness. I cannot imagine Bourbon Street during Mardi Gras. How is “more” possible? Once darkness falls on the French quarter of New Orleans excess rules the night. 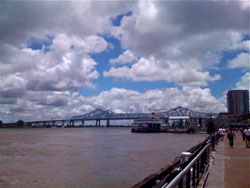 Boardwalk along the Mississippi

On Saturday afternoon I returned and found a more sedate scene. This time it was tourists and their families. Every street corner had a jazz band with drums, brass interments and horns. It was wonderful and the music was not simply good, it was outstanding! This was the birth place of American Jazz and it manifests everywhere! It is not possible to compare this scene with the revelry of the previous night. The “steer” parade had vanished and bars just looked like normal bars. The stripper polls were no longer embellished. What I did not notice night before were the huge number of voodoo shops. Before coming to New Orleans I had never seen a voodoo shop, but here, they are everywhere. Indeed, I learned that voodoo lies at the foundations of the local culture. The feathers, the beads and the masks all come from voodoo, and somehow I was not shocked to see Hindu images of Ganesha and Durga alongside dolls with shrunken heads, skeletons hanging on Gothic crucifixes and even ghoulish faces painted on tiny figurines. I could see no rhythm or reason behind any of this, yet it all seemed to fit. There are no contradictions New Orleans because there are no rules here. 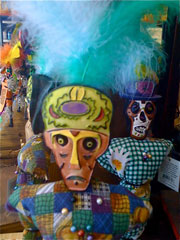 New Orleans is a subterranean world–it is literally below sea level–it is also in the grip of terrible devastation and poverty and yet it is struggling to return to former glory. There is a tremendous vibrancy here. New Orleans reminded me of Calcutta and like Calcutta it lies at the delta of a majestic river that runs through the heartland of the country. It struck me that this is where the sludge and debris of America is captured, processed and transformed by the mysterious culture of this place. It is said that jazz is the original musical art form of America and so I wonder if the unique culture of this place is not the magic crucible that has created this art form.

Later that day after the wedding, I spent the evening strolling along the board walk of the Mississippi in the dark and quiet away from the crowds and the unending party. Old man river, what a peaceful and tranquil beast you are. With sullen eyes you peer up from the water and glance back upon the city that is your creation. I sat for a while, then walked a little and then sat some more, and in the distance I could see the ferry boats silently move up and down the river slipping through the darkness. It was peaceful. I want to return to this place.