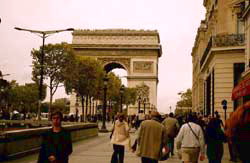 I have just completed my first full day in Paris. I now know why Parisian are all thin. They walk. I have never walked so much in one day it seems. Taking the Metro is just another way of walking. And even when you are in a Metro train you stand. The trains are crowded! Now that I have traveled around Paris a little, I no longer think that Parisians are any more sickly than any other northern climate city dwellers. Neither are the subways any more ethnically diverse than what I have seen in New York or Toronto. Yesterday, when I arrived I was traveling through a lower class area of the city. Today I was in the downtown and, for sure, tourist area. You see hardly any graffiti in this area of town, in general Paris is on the dirty and run down side of things compared to say San Fransico a comparable tourist city that I know.

I took the Metro out to le Jardin Des Tuleries for a bus tour of the city. For sure I was a 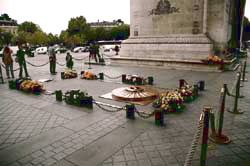 TOURIST today, complete with camera around my kneck! What can I say? Paris is absolutely overflowing with culture and history. My dear Steve, what in God’s name are you doing in Riverside? After spending years in Paris why would any one want to be in America. Paris in wonderful! On this single bus tour I saw so much culture and history I can not absorb it all. Afterwards, I walked along the banks of the Seine, through the Jardin Des Tuleries and up the whole Champs Elysees to the Arc de Triomphe. By the way, it is a living war memorial complete with an eternal flame. I did not know that. The Champs Elysees is like Times Square in New York only much bigger. The crowds are overwhelming. At any given time Paris must have hundreds and thousand of tourists! You can tell the difference between the Parisians and the tourists because the Parisian are smoking. And what is the fixation that Parisian women have with little dogs? in pairs no less! It is hilarious to see. 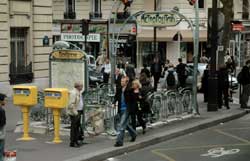 The food is wonderful. It is worth coming to Paris just to eat. I have never seen so many restaurants and food shops. They are everywhere and yet no one is obese. I have yet to see any diet sodas or non sugar sweeteners. And no one is fat. Can it all be attributed to walking? The cheapest gas I found so far is 1.19 Eruos. That is over $5 a gallon, but there is no shortage of cars or things to buy, so Parisians must have money. I can also see that Steve Jobs is having a major love affair with the Parisians. ipods everywhere. So far I have yet to find any internet access. The wi-fi revolution has yet to hit Paris.

Today while I was eating some lunch in a restaurant I could hear Mylene Farmer singing on the radio. The waiters were whistling to her singing. When I mentioned this to them they could not believe that I knew who she was. I made major brownie points for America with recognition and positive comments about Mylene. Parisians love her.