I had a most interesting day. I went to the Thyssen Museum which is a mixture of old and new art. Again, like the Prado they do not allow photos so it is hard to tell you exactly what I saw. It was a lot! They have a reasonable collection of French Impressionism, a lot of Dutch masters and a large collection of modern Cubism and Realism. In addition they had a special exhibit of Monet, which I will talk about in some detail. 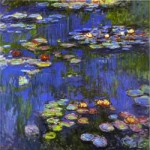 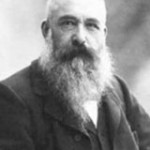 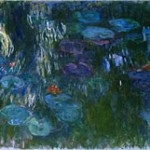 I felt like walking so I walked there and back from my hotel. It is about about an hour each way. I love to walk. It was also drizzling and I love the rain. So I walked in the rain. In California we can go for 9 month at a time with no rain, plus we have intense heat, so how could I turn down the opportunity to walk on a cool rainy day. I even danced for a bit.

A few years ago when I was in Paris there was a special exhibition of French Impression at the D’ Orsey with paintings from all over the world that you do not normally see in Paris. So what luck, another special exhibition here in Madrid! Between London, Los Angeles, Paris and now Madrid I have seen a lot of this art form. In London a Monet just sold for over two and a half million dollars! Can you believe that!

Monet was born in 1840 and died in 1926. The exhibition started by showing a series of early paintings from around 1860, then some in his middle years and then it moved into his final years from 1915 through to his final days in 1926, his so-called Water Lily Period. There was a lot of detailed discussion on the audio presenters, but in essence it showed how in his early years his painting had a lot of concrete form. You can see people doing things in recognizable places, then gradually his paintings become more about light and less about form and places and then in his final years form disappears completely and it is all about light and color. His art moves from the concrete to the abstract. In his early days he was painting on the streets, in his middle years he was painting in rural environments and his final days he was painting in almost total seclusion. This seems to be a common course of life events, moving from the external and concrete to the internal and abstract, but I have to tell you I like the early and middle Monet a lot more than the later Monet. At a certain point he losses me. I experienced a similar situation doing some research once in India. I was studying the life of a particular religious leader who started in his early years dealing with concrete and more tangible religious issues, but in later years ended up in etherial mystic pursuits. He lost me along the way. This Monet exhibition also showed later artists who were following Monet, only their works were starting from where Monet was ending his painting career. Their work was purely abstract and from my perspective just smears of color on canvas, something a child naturally does. I would almost call it finger painting.

In the case of the old Monet, he had made his money and had no one to please other than himself. His art became solely a private meditation and internal exploration, so he had no need to please an audience. In my opinion, however, no one can not deny that there is a relationship between artist and viewer and when an artist becomes so internalized and abstract that he loses his audience it is time to call his work poor. In the case of a Monet, who had spent a lifetime building a reputation, people ooh and ah at his stripes of paint on canvas just because they are put there by Monet, but I will honestly tell you, as far as I am concerned his later work is nothing compared to his early and middle work. I am not making a case against artistic abstraction, but there is a point where things break down, where great art becomes poor art. I sat in front of many ‘modern art’ paintings today in other parts of the museum and looked at two colors on a canvas and listened to the audio instructor trying to tell me how the painting represented this or that. Call it what you like, but absurdity is absurdity.