I have been to London at least three times, but this is the first time I am truly seeing London. What an amazing place! I thought Paris was spectacular, and it is, but London, by far, dwarfs Paris. I have never seen such crowds spread throughout so much of a city. Paris is crowded along the Champs Elysees, the Louvre and the Eiffel Tower, but in London they are everywhere. The city is a wash in people!

My hotel is excellent (the Renaissance near Heathrow). However, it is an hour’s ride on the underground from downtown London. Before I left the US, I arranged my hotel near the airport because I wanted to rent a car to drive to Stonehenge and other places, but I now see this is unnecessary because trains go everywhere. And I love trains! At first I thought riding the underground into London everyday might be a problem, but London’s underground system is clean, well maintained and efficient, and it is a good time to work on emails and take travel notes. I cannot tell you how much I have come to rely on my phone to handle these things and a lot more. In fact my phone is not a phone anymore. It is my window to home and the world. I cannot say too much about this digital communications! I can pay my electrical bill in America while sitting on a train in the London tubes. Today I am planning a tour of London. It is my first full day in the city so I am renting a seat on one of those open roof double decker tour buses that move throughout the city. This way I can get on and off anytime I wish. I always do this the first time I arrive in a new city.

Many things strike me about London. Cameras and tabloids are everywhere. I have never seen so many street cameras as I see here in London. You can not move one inch in this place with out being recorded. This is not a good place to rob a bank! I also think the British have a fetish for celebrity gossip and especially “tits and bum.” This place has cornered the market on supermarket tabloids. It reeks of trashy tabloids. But what strikes me most about London is its overwhelming international flavor. Every inch of this city is global. I cannot help but be struck by the question, how such a tiny island managed to affect the world in such profound ways? Britain has given birth to almost two thirds of the modern world. What was it in British culture and education that allowed this? I have discussed the issue of open and closed cultures elsewhere and without any doubt this is a profoundly open culture, and it shows everywhere. Every possible language is heard on the streets of London. Walking in the streets I am overwhelmed with unending monuments, lavish architecture and crowds of tourists. It seems that London has more tourism than Rome and Paris combined! I am impressed beyond measure. And the people are completely open to talk. You can easily strike up conversation with almost anyone. The French hardly give anyone the time of day. Yesterday I talked with a policemen guarding the house of commons. He gave me as much time as I wanted and when I needed directions to the underground to get back to my hotel he looked at me with sympathy and said, “Had a enough for one day, have yea?” “A bit much isn’t it.” He was so right. I told him how impressed I was with everything and then we went on to talk some more about why Britain has been able to affect the world so profoundly. He thought it was because the industrial revolution first started in Britain. It was funny to hear him talk about America as a young country. “Give your country 500 more years it will settle down and do well.” As he said this, he winked and smiled. 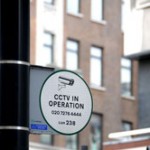 Everywhere in Britain is on cam. These signs everywhere 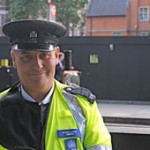 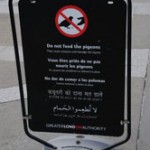 A sign in Trafalgar Square that tells all about London 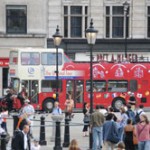 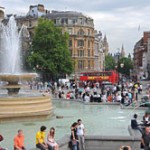 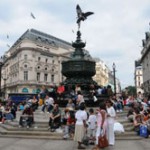 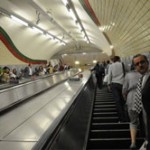