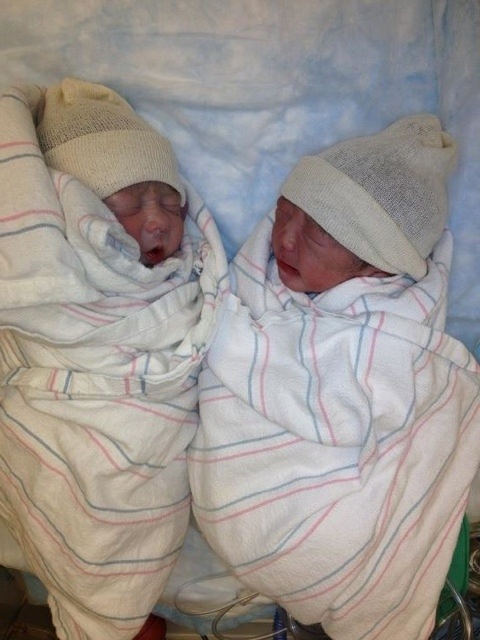 Yesterday was a good day. Sukulina and I got to see the twins along with Ramai and Evonne. Wow they are tiny! Not only because they were born premature, but because they are new borns, twins and fresh out of the oven. Tiny feet, tiny toes, tiny hands, tiny fingers, tiny ears, and big heads. Huge heads compared to their bodies. Already they are very different. Satva is oriental in skin tone and eyes, Naryan is more caucasian, with a lighter complexion and more rounded features. Satva is active and demanding (as in ‘feed me now!’) while Naryan sleeps and seems more peaceful (as in ‘everything is cool, relax’). Naryan is a full pound bigger. They say, this is because he sleeps more. Even now it is obvious they are going to be two very different persons. They are born only 5 minutes apart, so they have identical astrological charts including even their 9th divisional (navamsha) charts, yet their appearance, activities and personalities are highly distinct already. What does this say about astrology?

After visiting Evonne and Ramai and the twins, we headed to the Honda Center in Anaheim to watch an NHL hockey game. The Anaheim arena is a beautiful facility. And it’s huge! I’d never been there before. But, of course, I’m not accustomed to being in such places so I have little experience to know what a big or small arena looks like. Plus, I’m easily impressed by just about anything. We arrived an hour into the game, which was surprisingly crowded. I think it was 3/4 full. That’s a lot of fans for a Wednesday evening in a part of the country with no history of hockey culture. The crowd was distinctively white and the ages seem to run from young to old. It was a spectacle that brought back a lot of memories of Hockey Night in Canada, that Saturday night ritual which is the hallmark of every Canadian. Would I return again to watch another hockey game? Probably not. I’m just not interested in hockey. I only wanted to see the spectacle and take action photographs. The best part was that first image, walking into the arena and seeing for real what I’ve seen on television a thousand times while growing up. That was breathtaking!

As we drove home from the game Sukulina read aloud the Wikipedia history of the NHL. This is an amazing thing to be able to do, researching from the web at 110 kms/hour.

Between seeing the twins and live hockey it was a good night.