While on this island I took a trip to the local Hindu temple, a Shaiva Siddhanta temple this morning. These are the people who publish Hinduism Today. It was pouring rain throughout the visit. Going there reminded me of visiting New Vrindavan in the early days, complete with the mud, only instead of West Virginia sticky clay, it was Hawaiian volcanic mud. Much preferable, but mud just the same. Only someone who knows West Virginia will know what I am talking about. And any rate, what they have is a small, but extremely authentic, Shiva Mandir with an assortment of side shrines located taround the property in various banyan tree groves. It’s not worth the visit unless you can actually enter the main Mandir shrine, which has very limited and strict public viewing hours. However, darshan in this Mandir, if you can catch it, is spectacular. It makes a trip to this island worth it for this purpose alone. It’s that good. These people are not catering to the public. This is a monastery and they mean to keep it that way. 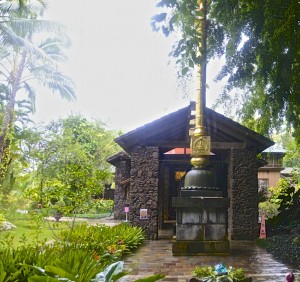 The worship in the main shrine is first class, clean and absolutely punctual. Very much in the western Iskcon style. These are western bhaktas in the Shaiva tradition from south India. And like us in New Vrindavan they are convinced they hold the keys to the universe. The main difference between this place and New Vrindavan is that these people are focusing on quality instead of quantity. They have not sold out to the public purse yet. And God is blessing them!

Getting there is just like trying to get to Bahulavan. You travel a treacherous winding road up the side of a mountain, which is actually an extinct volcano. I can see the neighbors resent these people in the extreme partly because of their ‘goony’ Rip Van Winkle look, but mostly because they draw a lot of traffic, which I can see is a real problem. If we were bad with our shaved heads and white robes, these guys are worse with their shaved heads and ‘Rip Van Winkle’ beards, monstrous beads, and orange robes.

No photos are allowed in this shrine or anywhere near it. And this policy is strictly enforced. My good fortune was to arrive in a rain storm, so no one was around to interfere with the few photos and videos I did manage to shoot. I felt guilty doing this, but only a bit.

The main shrine is compose of two rooms, an outer carpeted room for devotees and a center attached shrine room, for the main deity, Annaaraj, dancing Shiva. On either side of Annaaraj are Ganesha and Karttikeya. When I was there a seriously bearded priest was doing puja and eight or nine devotees were sitting in the carpeted room, watching, listening or meditating. Half of them wore dreadlocks. This was a silent place. No tolerance for screaming children as in our temple or even chairs for the elderly. Along the adjacent walls in this carpeted room where dozens of one foot Shiva images. Would I be wrong to say there were a 108 in total on each side? The effect was powerful. So many identical images on each side of you is overwhelming. In the center of the room is a fascinating crystal Nava Graha apparatus. Each Graha is represented by a colored crystal ball that is positioned on a celestial grid about a meter in diameter with the nakshatra on the outside rim and the signs of the zodiac on the inside. There is a center globe of the earth, which suggests their view of the universe is geocentric. That would be typical. This is mediaeval Hinduism. Needless to say I was unable to take any photos within the main shrine area. 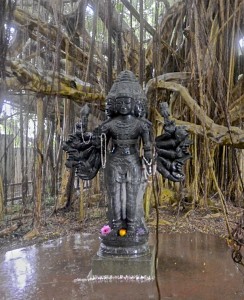 Outside, behind the main shrine, they have they have major construction to build a large Shiva Temple. Unfortunately the rain became so heavy I was unable to see any of this. The area was closed. I am told it rains virtually every day and many times during the day at this temple. Why anyone would want to build at this location is beyond me, but we know that putting temples in extreme places is always effective. Religion is an extreme enterprise and it always works best under these conditions.