I had an office on the main floor of the big building in Bahulaban, New Vrindavan, just above the kitchens and right off from the main eating hall. In those days, Haridham and I were working on Matsya, a project to catalog old Sanskrit books and palm leaf manuscripts that were being photographed in India. This is where I had my first computer experience. There was devotee named Bhavishat who had lent us a large CPM based computer using a 12 inch floppy drive! So in those days I was learning my computer acumen on a machine that only allowed text typing from a command line on a black-and-white screen. The machine was hooked up to a dot matrix printer that sounded like a tommy gun as it printed. I had little interest in, and definitely no passion for this computer or any other machine.

And then the Mac entered my life.

On the floor above us were the accounting and general business offices where Dulal Chandra, who was the main business manager, had his office. To this day I can still remember the call, something exciting was taking place in Dulal’s office and I should come up immediately. It was something I should not miss. So Haridham and I ran up to his office and, there, nestled amidst the managers of New Vrindavan, was the first Macintosh computer, a 128K machine. Kuladri, the community president, was giving a demonstration drawing pictures on the screen with a hand held device he called a mouse, and he was doing it in color! I was stunned, amazed and enthralled. And to top it off this mouse could even expand boxes, open windows and programs and even select text. I saw proportional fonts on a screen for the first time, and instead of a 12 inch floppy drive it had a tiny 3 inch slot for a cassette disk. And then to top it off the machine could speak! “Welcome to Macintosh” and then it proceeded to type whatever Kuladri typed. It was nothing less than magic. My heart was pounding with excitement. It was love at first sight. I had to have one and at that moment I became an Apple devotee. Yet, there was a problem. The machine was so in demand that everyone had to have one. They were completely unavailable, and this is the way it’s been for almost every Apple computer since then. It was a year before I could get my hands on the next Macintosh, called the Fat Mac, a 512K machine. Believe it or not I paid over $2700 including tax for this machine, an incredible sum money in those days. I bought it in an Apple Store in downtown Pittsburgh and since that time I’ve never been without an Apple computer. In fact, I can say I’m still unsullied. I’ve never, to this day, even turned on a PC machine. Yet I don’t even want to think how much money I’ve spent on Apple computers over the years. My first hard drive that eventually connected to my Fat Mac was a 10 MB drive that cost over $800!!! 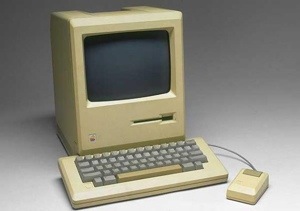