Here is my translation of the oldest creation “story” within Hinduism. (Rig Veda 10/129) In fact it is not a story. It is a best speculation or guess. Yet without a doubt it is one of the oldest hymns of its kind from any religion. The beauty and profundity of this hymn is its honesty: We don’t know!!! We don’t know how this universe came about. An argument could be made that this is an agnostic text.

1. At that time there was neither Being nor non-Being. There was neither atmosphere nor sky beyond. What did this universe contain? Where did it exist? Under whose protection was it? Were there waters, impenetrable and profound?

2. There was neither death nor immortality. There was no indication of night or day. Without air, spontaneously that one breathed. Other than this there was nothing.

3. Darkness was hidden by darkness. Unrecognizable, all was surging. Whatever  came into being had been covered by void. Then, accompanied by the power of heat, that one arose.

4. And then desire, the first seed of the mind, enveloped that one. The wise, searching with intellect in their hearts, discovered the connection between Being and non-Being.

5. Their mental reach extended out. Was there below or was there above? There were creators, there were powers with energy below and impulse above.

6. But who truly knows? Who can say from where creation originated. Gods came after creation. Therefore, who knows from where it came to be?

7. From where has this creation arisen? Whether He caused it or not. Only He, in the highest heaven, who is its witness, truly knows, or perhaps, even He knows not.

The words are sat and asat, which Sayana, an 11th century commentator,  renders as bhava and abhava, being and non being.

The expression used here is tad ekam, ‘that one’, which Sayana says refers to Brahman, an impersonal form of divinity. The word ekam is used only twice in this hymn, once here, and once at the end of next verse. Sayana takes the first usage to refer to divinity and the second usage to refer to the creation. Some commentators take it to mean the creation in both cases.

The word used here is salilam which indicates flux and change. It is often translated as water.

Here the word used is tucchyena, void or emptiness. Sayana says this word means a state of neither sat or asat, being or nonbeing.

This is the second use of the word ekam, which Sayana says refers to the creation.

Here I’ve translated using the word ‘one’, but in fact the word ekam is not used. Instead the text only reads tat, that. Commentators like Sayana says tat means paremeshvara, God.

Literally raśmi is a cord or beam of light. I’ve glossed it as ‘mental reach’. Literally the text reads, “Their cord was extended across.”

This is the first use of the pronoun sa meaning he. Sayana says it means ishvara, God. 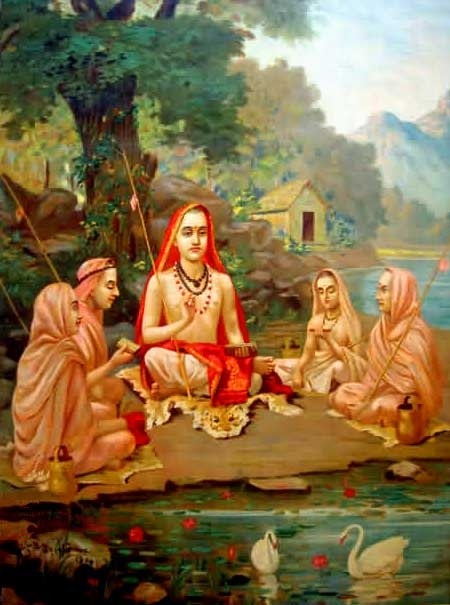