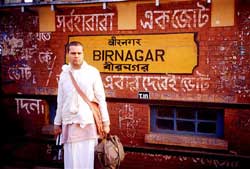 Ah, Calcutta, what can I say? Chaos, a sea of humanity, noise, smoke, filth, incredible sweets and tremendous excitement. If you just turn off your mind to the noise and the filth and tune into the life it’s not too bad. Gaura and I are waiting for a train to Navadwip, but it is late because of a student’s strike. Typical. Political slogans are everywhere along with the hammer and sickle. Such a strange sight. 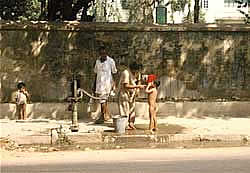 Calcutta is such a place! Walking around I saw corpses lying on the street. Mangled animals, appalling filth. Words cannot describe Calcutta, whole families of 10-12 kids plus grandparents live on the street. Literally, you don’t walk on the side walk, it’s someone’s living room. Calcutta is one unending slum. It’s a grotesque boil, a festering wound on the body of mankind. In spite of all this it has a vibrant life going on. Children play games on the garbage piles and have fun. Everybody just ignores the squalor and gets on with it. 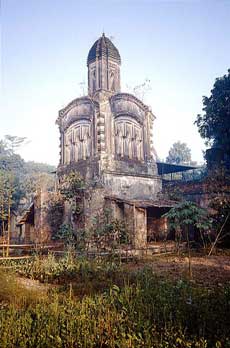 Now we are traveling to Navadwip by train. If you could just see where I am sitting! In the hallway on the floor just outside the toilet – what a stench! The smell of urine is overwhelming. Not very comfortable. Before we left we visited the Calcutta They think that Bhaktipad is crazy. They have heard so many things. But then they have their own crazy gurus.

The Bengal countryside looks beautiful with lots of rice and vegetable cultivation. Two women just boarded the train with bags of coal which they proceeded to store in the toilet. On all sides I am surrounded by women dressed in filthy rags. The train is so packed, you can’t even breathe, a tea vendor comes on with his whole heating equipment – red hot coals and all. What a scene! 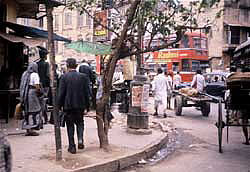 Birnagar is a beautiful place – serene. I can see why TBV praises it. Took some good pictures. Bhakta Ma is in charge of the place. She was a servant of Lalita Prasada, sweet old lady. I picked up Krishna Dasa’s biography of TBV – a great find. We are returning on Wednesday with Gadadhara Pran to photograph the Jivani. In Calcutta at the Bangiya Sahitya Parishat I found 16 volumes of Sajjana Toshani, I gave them 2000 rupees! for photo coping. That’s $150, it’s worth it though. This material is very rare. It will take a few weeks to photocopy and so I will have the set shipped to me by sea mail. At least this way there will be a protected set of the Sajjana Toshani in the West.