My parent’s home was in a suburb of Toronto and the temple was downtown. That was a distance of 35 kilometers. To reach the temple I would walk two kilometers from my home to the subway station and then take a train to the downtown area. After this I had to walk another two kilometers. In other words, getting to the temple was not easy. It took well over an hour. 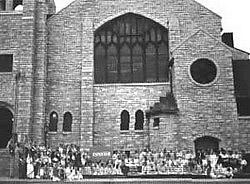 The words brahmachari and brahmacharini need some explanation. Brahmacharini is simply the feminine form of brahmachari, The word brahmachari is composed of two words, brahman and charin. Brahman means, “the big” and charin refers to “one who goes” so literally brahma-chari is “one who goes to the Big” or perhaps a better way to say it is “one who follows the way of the Big.” Brahman is a neuter word used in the Upanishads to refer to the ultimate power, the ultimate force that pervades the universe, the Big. I hesitate to use the word God because that implies personality. Brahman is strictly neutral, no face of God is implied. A few years ago there was a famous movie called Star Wars wherein the ultimate power of the universe was called The Force. The expression, “May the Force be with you” became popular. If you know that movie then take The Force as brahman. The movie is pure Hinduism. But there is more. Implicit within the idea of following the ways of Brahman is the concept of celibacy.

Within the western religious traditions the idea of celibacy meant the exclusive dedication of one’s self to God. The devotee would not share one’s self with another, only God. Through the sacrifice of celibacy the devotee married God. In Hinduism celibacy means semen retention. In Sanskrit there is a word medhas which means sap, pith or meat and by extension it means intellect or intelligence. The word su-medhas means a lot of sap and therefore great intelligence. (Su means increase). The idea is that by retaining one’s sap one increases one’s intelligence. Here sap means semen. The Sanskrit word for semen is shukra (not shuka!). Shukra means “the shinning” and so semen is the shinning essence of life that needs to be raised from the genital area to the brain, and the more of it that moves up the better. The spilling of semen is a great waste because you are quite literally spilling your brains. There are great ramifications to this idea that I will discuss in due coarse. The concept of semen retention and elevation is derived from the process of kundalini-yoga wherein the yogi moves the “serpent energy” from the lower chakra located at the base of the spine through the intervening chakras and ultimately to the head chakra, the thousand petaled lotus. The higher the energy is raised the more power the yogi attains. When this serpent energy reaches the head the yogi attains brahman and release from this world. Within Hinduism there is an understanding that Jesus was a yogi. His ability to walk on water, cure the sick, turn water into wine, and so on. was the result of his yogic power.