↓
Home Menu ↓
Skip to primary content
Skip to secondary content
Home→Blog→Memoirs→Marriage Dallas, 1975→My First Sight of Kama Nagari
The sun did not rise in Dallas until much later than I was accustomed to in Toronto. This meant that the morning japa (chanting) time did not occur until after 7:30 AM and so the daily scripture class was held immediately after Managal Arati. This afforded me the opportunity to study my newly discovered love during the class. The morning Bhagavatam class is a feature of every ISKCON temple throughout the world. The class lasts for an hour and depending on the speaker it can be incredibly enlivening or mind numbingly boring. Mostly it was boring, but on this day it was incredibly enlivening to me. My heart was pounding. Who was this woman? She wore a mauve colored sari made of simple broadcloth and purple tinted large glasses. I was captivated. All through the class 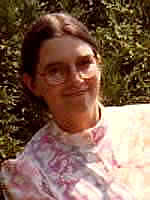 she quietly sat and sewed as she listened. This particular class was about the great sage Vishvamitra, whose spiritual austerities were ruined by maya in the form of the heavenly courtesan, Menaka. The king of the Gods, Indra, had enlisted the help of Menaka to distract Vishvamitra from his vow of celibacy and thus ruin his spiritual life. And it worked, the sweet tinkling of Menaka’s ankles bells was enough to bring the sage down. Ah, what a time for a story like that! I could not help myself from glancing across the room to catch a glimpse of my Menaka. I hoped she did not catch me peeking. I did not want her to think that she had the power of maya over me. In the japa period that followed she walked outside with a group of other women to greet the rising sun. They walked around the temple as they chanted. So I followed along with a group of male devotees, only my mind was not on the japa. I was hearing the tinkling sound of ankle bells. Later in the day I inquired about this girl and I was told that she worked in the graphics department of the school, that she was married, but was in the process of a divorce. I was also warned that she was considered particularly lusty. So I wondered, “Should I try to meet this maya?” I had never been tempted by such feelings before. I felt confused and ashamed.

Within ISKCON meeting members of the opposite sex was always forbidden. There was no 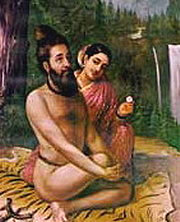 such a thing as dating. Every temple was run by a Temple President whose job it was to protect the celibate men from the allures of the female devotees. Some presidents assumed this task with particular relish. At times classes were given that described sex as just “two urinals rubbing together.” Women were described as less intelligent and nine times lustier than men! That was hard to imagine for me. A woman was fire and a man in the presence of a woman was butter. Woman were prostitutes just waiting to milk a man dry. When you had sex you lost some of your brain power. Sex was for one thing only, making babies. So if you wanted to meet a girl you had to marry her! Marry her? I just wanted to know her name. And so if you approached the Temple President with a particular girl in mind he would likely lecture you about the evils of womanhood and try to scare the hell out of you. If that did not work then in the end you would be asked to marry her and still remain celibate, which, of course, was a prescription for disaster. In the early days of Krishna consciousness this was the environment in which I had to meet my Menaka.