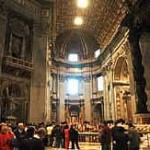 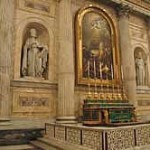 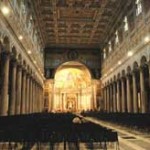 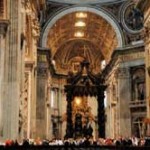 On Sunday, after seeing the ancient ruins of Rome I visited the cathedral to Paul called Santa Paulo. Later I visited Rome’s major cathedral to Saint Peter, Santa Pietro. Santa Paulo is grand, but Santa Pietro is beyond anything you can imagine. Personally I was not impressed with the outside of either cathedral or most cathedrals in Itally. The French cathedrals are much more impressive on the outside, yet the inside of the Italian cathedral is overwhelming. Between these two places I must have taken 400 photos. The beauty of digital photography is that you can take an unlimited number of photos. It is extremely hard to photograph any cathedral because of the darkness inside and because in most places flash photography is strictly prohibited. Even when it is allowed, how far can a flash reach when you are in a structure the size of a football field? Tripods are not even allowed without special permission which can take weeks to obtain. Yet the great thing about of digital photography is that you can turn off the flash and shoot holding the camera very very still and the ccd will usually pick up enough light to create an image, particularly if the digital camera is used with a “raw” or very high density jpg setting. What you will see on the camera’s lcd will be completely black, but you can process the image later, raise the exposure setting, sharpen the image to remove most of the handheld blur and then crop and straighten the image to get an acceptable photo. This is how most of my images were taken.

Another problem with shooting in a cathedral is that you are usually standing in a crowd that is moving along. Most large cathedrals are set up so you enter through one set of doors at the front, move through the building in a counter clockwise direction and then exit through another set of doors. As you move through the cathedral you are pushed along by a large crowd of competing photographers and pilgrims with audio tour headsets. It seems everyone has a camera! Most people are using tiny digital cameras or even cell phone cameras so I cannot imagine that they are getting usable photos. Very few are using a large size DSLR cameras like I me. Everyone is tripping over everyone else to take the same shots. So under these circumstances photography within a cathedral is difficult. Given that this was my first attempt, I am extremely happy with the results that I achieved. I went through Santa Paulo and Santa Pietro in the off season and on a rainy day, so I can only imagine what it would be like during the peak season.

The line waiting to get into Santa Pietro was about three hours long and it was raining. Knowing some tricks from India where waiting in line is a given, I cut this wait down to about an hour. After Santa Pietro I went into the Cistine Chapel. The line was over 5 hours long, also in the rain. I was able to get through in about 2 hours. I thank Gaura Keshava for his knowledge of line speeding. I am sure he would have been through in 15 minutes, but I am not willing to be that bold. He is Australian and I am Canadian.