Today, (Sunday) I took a tour of the ancient ruins of the Roman Empire. They were spectacular! Part of what I want to achieve in this trip is to look back into my Western roots. Christianity, of course, is just one part of those roots and I saw a lot of that in Paris, and I will see more here, but the more critical part of those roots is in my non Christian past, namely classical Greece and ancient Rome.

This may seen strange to you, but my Hindu side brings the Roman Empire very close to my psyche. Indian and ancient Rome have a lot in common, namely, they have similar religions. The religious foundations of the Roman Empire and, for that matter, all of Europe are based on the poly-theistic traditions of the ancient Aryans. The mono-theism of Christianity came much later and covered over those distant origins, but they are still there if you look closely. Anna, the religious renewal that I experienced in Paris at Notre Dame was not a Christian religious experience. That would be something very specific, instead my experience was more universal. The cathedral of Notre Dame is dedicated to

the Virgin Mary, who is none other than a local manifestation of a universal feminine force that, for lack of a better word, I call Mother. Projected through Christian culture the Virgin Mary is the local “portal” for that force. This universal Mother force appears in all religious cultures, as Durga in India, or as the Goddess Roma in ancient Rome or Athena to the classical Greeks, and so on. In Notre Dame I was touched by this universal feminine force, Mother. And just as a mother, nurtures and cares for her children, that is how I felt in Notre Dame. What a wonder, that in the living culture of Christianity, I found this universal force. It was most unexpected. The sound of the chanting, the roar of the pipe organ resounding through the cathedral, the smell of the incense and the very ambiance of the cathedral itself all worked in unison to evoke the experience of Mother within me. This is the power of symbols. 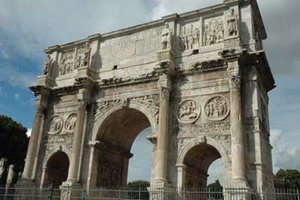 Anna, please do not dismiss or under estimate what I am saying. There are many universal forces that work in this world to shape who we are. They are within us and through the proper use of symbols these forces can be evoked, like striking a piano key. The grandeur of ancient Rome is hard to experience today because it lays in ruins and is covered by the magnificent art and architecture of Christianity. The glory of Christianity, however, is built on the foundations of classical Greece and ancient Rome. The Greeks, the Romans and the Indians are related as cousins. Today only the religious culture of the Indian branch of this group is still alive. My visit to ancient Rome is a walk into my European classical roots. I was enthralled to see temples to Roman Gods and Goddesses. It is just like India. I felt at home.

The remains of the Roman Empire are amazing. So old! The best example is the Colosseum. Most of everything else is buried or decayed beyond visual recognition, but the feelings are still strong in these ruins. I sensed that I was very close to some amazing powers. I can not begin to tell all the details. That you can find in books. All I can show you are some photos that I took around the Colosseum. These are sites that, of course, have been photographed a million times, but to me they are special because I was there to take them myself. What a great feeling to move my hand across the wall of the Colosseum before I pushed the camera button to record that history or to walk on the roads where a million chariots once moved through these streets. I stood in the temple of Roma, the same Goddess of Notre Dame, Mother.