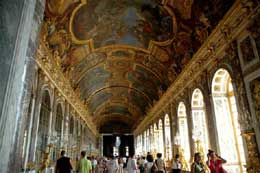 Right now I am sitting on a first class train traveling to Milan. Train travel is something that I enjoy immensely, but I worry that there is no security whatsoever. You see a few soldiers patrolling the stations, but other than that there is no personal screening or even baggage scanning. From an American perspective to see the military patrolling airports and train stations with machine guns and grenades on their belts is an interesting experience. Even though we have the one of the largest military you hardly see it. We are not accustomed to seeing such displays of weaponry in public places, But in spite of it all, anyone could bring anything on to the train. This is going to be very costly to Europe one day. 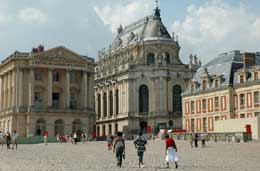 Yesterday I traveled to the Gare de Lyon in Paris to validate my Eurorail pass and to see where I needed to go in the morning. I do not like to make guesses in the last minute. I never like traveling blind. What can I say? I have now mastered the Paris Metro system as well as its REF train system. I managed to get lost for a while over the trains, but eventually I figured it out. My goal was to go to Chateau Versailles and after some confusion I eventually made it there. I could have easily taken a tour bus, but I prefer to travel alone and learn the ropes of travel in Europe. While walking in the streets of Versailles I came across a men’s barber and so I stopped for a hair cut. Last trip I would never have attempted such a feat, but this time I am more confident. Outside of Paris hardly any English is spoken and so again I got an good chance to speak french with the local barber. After my hair cut I tipped him and asked if I could use his toilet and to my great surprise I found a squatter just like India. I asked him about this and he explain that such things are common in the villages. With my injured knee I am not sure such a device would be welcomed, but otherwise they really are good arrangements for nature. 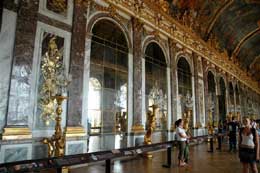 The Chateau Versailles is absolutely unbelievable, such exquisite decadence! I saw so much Palace of Gold from New Vrindavan here! I see where Bhaktipad got his ideas and where he was going personally in terms of his imperial guruship. It was also exciting to know that Benjamin Franklin came here and that the Treaty of Versailles was signed here after WWI, at least in a box car nearby. I also noted the design of the palace around the nine planets and how the entrance faces east. There is a lot of classical influence in this palace. Although there are of course many Christian motiffs the majority of what I saw was Roman and Greek. Even the term Sun King is classical. Versailles is a definite must see. 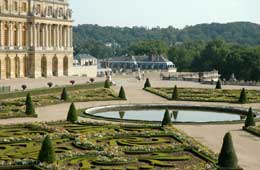 After Versailles I returned to Paris by train and returned to a particular cafe that I like to dine. Again I love to eat in France. I have learned to take great time over a meal, at least one hour is mandatory. After my meal I returned to my hotel and arranged my check out. I paid 215 Euros for four nights! Unbelievable! Ordinary rates for such a place are 450 Euros per night. I thank my hosts. I was also surprised how crowded the Metro is. Even after 9 PM. the cars are packed. I have never sweated so much. It is not possible to talk to people on the Metro. They would think you are up to something.