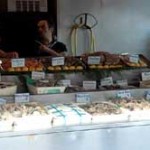 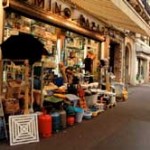 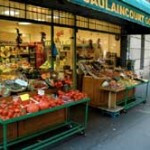 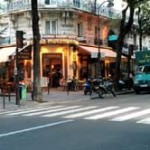 I have never tasted food so good as I did in Paris. I want to return just to sit in Paris cafes and break off pieces of french bread and soak them in soup! Mmmmmmm. What I can eat is so limited and yet I enjoyed what I was able to eat with glutinous delight. There is a sparkle to french cuisine that is indescribable. On the first night I arrived, I randomly stopped at a local cafe and tried my, “pre approved” food survival line:

Je voudrais le potage aux legumes sans viande et un morceau du pain, s’il vous plait. (I would like vegetable soup without meat and a little bread, please.) It seemed as if the whole cafe suddenly turned around to see who this American was trying to speak french. There was a deafening pause from the waiter, as if he was deciding whether my attempt at french qualified me to be accepted or snubbed, and then with a big smile he replied. Ah, oui monsieur, mais nous n’avons pas de potage aux legumes, au lieu de cela nous avons un potage des tomates. (Ah yes monsieur, but we do not have vegetable soup, instead we have tomato soup.) I stood in utter disbelief and joy. I understood! This was my first conversation in french in Paris and it worked! D’ accord, merci monsieur. I agreed and within minutes I saw someone returning to the cafe with a baguette in one hand of fresh tomatoes in the other. That evening I had the best tomato soup I have ever tasted. I was now a Parisian.

I can not imagine a city with more cafes, pastries, butcher shops and open markets than Paris. Food and drink are everywhere in Paris. On every corner there is a restaurant. In Los Angeles we have a Starbucks; in Paris they have a cafe on every corner. During my stay in Paris I must have sampled two dozen of these street cafes. After a few days I was beginning to collect favorites. When in this part of town I go here, in this part of town in go there and so on.

In a Paris cafe dinning is a pastime of great leisure. You enter a restaurant, take a seat and a waiter–I don’t think I saw a single waitress the whole time–brings a menu. Ash trays abound. Is there a non smoking section? Are you kidding? In America you are served water automatically. In Paris it is almost the same with wine. You buy water. In America you eat, you are presented with a bill, you leave. It is production-line dining. In Paris you eat; you stay; you read the paper, talk to the waiter; sip some wine, eat some more, talk to guests, sip coffee, eat some more, sip another wine. You never seem to leave. I felt the waiter would be broken hearted if I left. And you never seem get a bill. How do I get out of here? Bring me a bill so I can leave, damn it! It seems like you move in for the day! In the end when you finally do pay, the waiter works from memory right at your table deciding what you consumed. He writes everything down on the serviette you have been wiping your mouth on. But who can remember what you ate, it has been so long? Finally you pay him cash and he makes change from a apron right in front of you. Taking your credit card to the front is unheard of. Do you tip? Who knows? I never figured that out. I just did anyway. After all, you and your waiter have become good buddies over the last few hours!

Across the street from the Hotel where I stayed near the Bastille there was a patisserie that I especially liked. There I could buy all kind of cakes, cookies, breads and slices of pizza. Before I left America, my assistant, Steve, had armed me with the operative words for dinning in Paris, sans viande, without meat. But what he failed to tell me is that I should also include sans poissons et sans poulet. Apparently fish and chicken are not included under viande. I am reasonably sure I am still a vegetarian, but I had a few close calls. One one occasion I was saved by a fellow customer who understood what I was trying to tell the sales lady. Il est un vegetarien madame. A vegetarian! now that is something the French do not often run into. So I gradually learned how to buy food in Paris. At this particular patisserie I would buy a certain chocolate filled pastry everyday before I headed out for my day’s adventure. The lady got to know me and made sure I picked the one with the most chocolate fill. Ah, I can still remember the taste of this pastry as I sat on the banks of the river Seine having my snack. I love Paris.