As I write this note Paris and much of France is burning. For the last nineteen days riots have been raging throughout the main cities of France. It is fortunate that I was able to finish my trip before all this started. In the midst of these riots I do not think I would have taken my trip to Paris. But now that I have been to Paris, and now that I have made France a part of my life, I am disturbed by what is occurring. Yet, I am not surprised.

When I landed at Charles de Gaul I took the metro into Paris. As I boarded the train and began traveling I increasingly felt uncomfortable by the people who joined the train. It is hard to judge just where you are as you move through a new city, and yet I was beginning to feel unsafe. I was absolutely taken a back by the masses of graffiti and the garbage I saw in the streets. This was Paris? I was reminded of New York in the old days! Today New York is not nearly as bad as it used to be, but what I was seeing here was not at all what I expected of Paris. Then, as I gradually came closer to the inner city, my feelings of insecurity diminished and I began to feel comfortable again. Paris now looked as I expected. 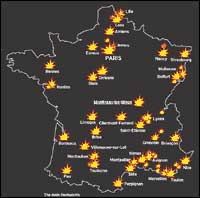 Anna, you may not know, but American cities are usually their worst at the center. The farther you move away from this center the better it gets. I was confused by Paris because it is just the opposite. I now understand that I was moving through the neighborhoods that surround Paris where mostly black North African muslims live and that this is the area where the rioting is occurring. Spend just a few hours walking in the streets of Paris and you know that Paris has a huge muslim population much of which is from north Africa.

I like multicultural cities. I love to walk the city streets and take in the sights, flavors smells and sounds of the many cultures, but it is evident that France has a huge problem because they have not integrated these populations into the mainstream of French society.

Now these populations are revolting out of frustration and desperation. This is like the blacks in America. Every decade or so the black neighborhoods of Los Angeles erupt into rioting. However, I fear that the situation in Paris is infinitely more dangerous. This time the riots are just frustration driven, but I can see how they can easily become ideologically driven. A disenfranchised and frustrated muslim population sitting in the heart of Europe is a fertile ground for ideological driven terrorism. I am sure that middle eastern terrorism leaders are watching these Paris riots with interest. This time they are only burning cars; next time they may be blowing them up in public places. I am sure the French are now only too well aware of the time bomb that is ticking in their midst. But all of Europe should pay attention as well!