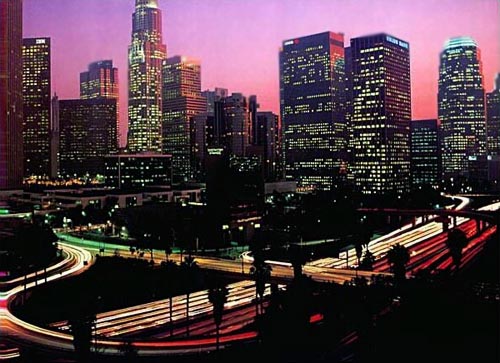 Now that Kama Nagari and I were back together again I no longer could afford the luxury of depression and so I become normal, and together we got down to the hard work of living again. We needed a place to live immediately. Temple apartments were not available, so we had to search for a private apartment near the temple. The Los Angeles Hare Krishna community was very big. There were hundreds of devotees. In fact the temple owned most of the buildings on both sides for a block in each direction. In addition, devotees who could not be accommodated in these temple apartments lived in great numbers throughout the neighborhood. We went looking for an apartment in the neighborhood near the temple. When we lived in Toronto, most of the apartment buildings were 20 or 30 story buildings, but here in Los Angeles two story buildings were the norm. We had moved to earthquake country! It would take a few months, but I would soon learn what this meant.

Finding a place to live has never been a difficult thing for me. Within just a day or two we had a place in spite of the fact that apartments were hard to find. That good old Jewish connection of Kama Nagari again worked wonders. Los Angeles is a very Jewish world and so just a few words of Yiddish landed us a good place to live. This time we found a one bedroom apartment on the bottom floor of a two story building. It was clean and quiet so I liked it. Truly I am a California man. Of all the places I have ever lived I like California the best. This was going to be my first winter outside of Canada and I was about to be permanently spoiled. It did not take more than a few days and we had moved into our apartment on Bagley Street, just a five minute walk from the Los Angeles Hare Krishna temple. We had virtually no furniture, just a few blankets so we slept on the floor. It was a very simple life indeed.

Now the matter of our house back in Dallas still had to be dealt with. Our car was also there. At first I was just going to abandon the whole matter and let the the mortgage company repossess the house. There was no loan on the car so I has just going to leave that parked in the driveway of the house. I had no idea what to do with a house that was 3000 kms away. Eventually I discussed the matter with Gadadhara and I soon learned that I could hire a property manager to rent the house out and maintain the property on my behalf. I was about to become an absentee landlord. I was very green, so I had never heard of such a thing. So after some discussion with Kama Nagari it was agreed that I would fly back to to Dallas, assign the house to a property manager and then drive back to Los Angeles with whatever things we owned in our tiny car. For me this was going to be a huge adventure. Flying to Dallas, doing business and then driving alone for such a great distance was a scary undertaking, but I was determined to do it. It did not occur to me at the time, but I am sure Kama Nagari worried if she would ever see me again. Would I stay in Dallas? Not a chance in hell; I had become a California man. For me California was love at first sight.

The trip back to Dallas was uneventful and the process of hiring a property management company was surprisingly easy. I had accomplished my first business venture and I was now a landlord in my new country. I did not see it this way at the time, but when I look back on the events now I am amazed that within just a few months of coming to the United States, Kama Nagari and I had acquired rental property. We were moving up! So within a few days I stuffed everything that we owned into our car and headed back to Los Angeles. The previous year I had driven from Dallas to Miami, that was east, now I was traveling west to Los Angeles. By the time this trip was over I would have seen more of this country than Canada. The distance from Dallas to Los Angeles is greater than traveling from Rome to London and this is only half the way across the country. United States is a very big country.