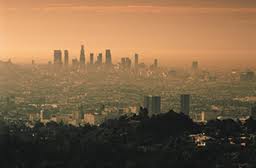 “The new American finds his challenge and his love in the traffic-choked streets, skies nested in smog, choking with the acids of industry, the screech of rubber and houses leashed in against one another while the townlets wither a time and die.”*

If you mix fog and smoke together you get smog! The Los Angeles basin is so called because it is an area trapped between the Pacific Ocean on the west and coastal mountains on the east. The flat area between these two natural boundaries extends for almost 40 kms. This is the area where 20 million people live that is called Los Angeles. Actually there are over 50 cities throughout this region among which the city of Los Angeles is the most prominent. When I lived near the Los Angeles temple I was actually in Culver City.

If there are 20 million people living within the Los Angeles basin it seemed that there were 40 million cars! I have no idea what the actual number is, but it is a lot. Cars, cars, cars, this is Los Angeles. Even today there is no extensive public transit system and in the late 1970s it was even worse. The private automobile reigns supreme. Literally I do not know a person over the age of 16 who does not have access to a car! Virtually all children get their drivers license at 15. And so when the exhaust of all these millions of cars mixes with the fog rolling in from the Pacific Ocean and it is blocked by the high coastal mountains we have the twinkling chemical soup called smog. Lots of it! In the 1970s the smog used to be much worse than it is now. Today all the cars in California burn a special fuel that limits exhaust pollution, but still it is bad.

Anna, when I lived here in the 1970s this smog was so thick that I could not see the mountains just 25 kms away for months on end. I would come home in the afternoon with pains in my chest and have to lie down just to catch my breath. It was this bad in those days. Just to live in this area was the equivalent of smoking two packs of cigarettes a day. Today one of the reasons I have moved my family to the desert beyond the coastal mountains is to avoid the smog of Los Angeles. This is life in California.