One thing that all Hare Krishna devotees have in common is the Walden complex. We all 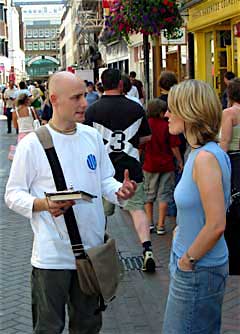 have this idealism firmly installed in our heads from birth and it was reinforced from within the movement, “simple living and high thinking” are the operative words. Kama Nagari and I moved to our eastern Ontario Walden in the spring of 1977 and by 1980 Marvin and Tucker and the slipper business was going strong. So much for simple living and high thinking. During these three years our involvement with Krishna Consciousness was minimal. We were both practicing devotees, but we had dropped off the radar as far as ISKCON was concerned. Occasionally, I would visit the Toronto temple just to see the Deities, but I shyed away from dealing with devotees. Prabhupada, had passed away in November of 1977 and my emotional attachment to the movement had ended then and there. After Prabhupada things changed quickly. Sankirtana was replaced by the “pick,” and turf fighting had begun. Anna,sankirtana is a Sanskrit word that loosely translated means “public praise” and devotees had become famous in the late 1960s and for most of the 1970s for going into the streets chanting and preaching the glories of Krishna. This was sankirtana. The need to raise money involved devotees selling their books on the streets. This was also seen as a form of sankirtana, but after Prabhupada the selling of books was largely replaced by the selling of all kinds of promotional paraphernalia such as the photos of celebrities at sporting events and rock concerts, bumper stickers and even copyrighted material such as National Football League logos. Eventually this even degraded into just asking for money for any convenient cause, homeless children, drug abuse victims or even the legalization of marihuana! This was the pick. At its best the pick was unbecoming of people representing a spiritual cause and at worst it was fraud.

Related to this were the turf wars. Certain temples created “pick teams,” mostly made of female devotees who traveled all over the country following sporting events and rock concerts. The money this teams made was often seen to belong to the local temples. Guru wars, fighting over disciples and theological interpretation also developed, so between late 1977 and 1980 these and other important changes had taken place within the movement. ISKCON was on fire with politics. 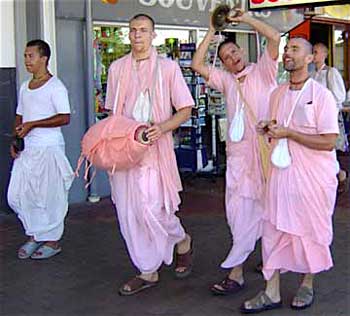 One day in the spring of 1980 I arrived home from a day in the city delivering slippers to find two devotees sitting in my kitchen talking to Kama Nagari and waiting for me to arrive home. There were no cell phones in those days so I knew nothing of them waiting. In all our years in the country Kama Nagari and I had never seen devotees, but I was happy to see them so I welcomed them and we sat down to talk. This is when I learned about the subversion of sankirtana into the pick and about the fighting within the movement between temples over money and the guru wars. The politics of Krishna Consciousness had suddenly arrived at my door step. These devotees were asking for spiritual and material shelter. The politics of ISKCON had forced them out of the Toronto temple.

Anna, in order to understand the next few installments, you will need to know something about the internal working of ISKCON. In 1966 the founding spiritual teacher of ISKCON, A.C. Bhaktivedanta Swami Prabhupada, came to American and started the Krishna Consciousness movement. As you know the movement quickly grew and temples were established in major cities throughout the world. Prabhupada remained alive until 1977 and during that time each temple had a senior devotee who was the temple president. He was responsible for the workings of his temple. The temples within a given geographic region were managed by an even more senior devotee called a GBC member, Governing Body Commissioner, who reported directly to Prabhupada. During the time that Prabhupada was alive there was only one initiating (disksha) guru, Prabhupada himself. After Prabhupada passed away many of these senior devotees, who were disciples of Prabhupada, became gurus and gave initiation themselves. I was one of the original initiates of Prabhupada and these two devotees who sat in my kitchen were younger devotees of one of these new gurus. In ISKCON a guru holds a lot of power over the lives of his disciples and these two disciples had been told by their guru to come to me for shelter. Their guru lived in the United States, so they could not legally live with him. These two men were refugees of the guru wars, and since their guru did not like that was happening in the Canadian temples he had told all of his Canadian disciples to come to me! I knew who their guru was; he was a God brother of mine (we had both been initiated by Prabhupada), but I had no idea that he knew anything about me. In those days I was just a quiet devotee living separately from the temple and making a living. Now suddenly I was being asked to assume a spiritual role. These devotees wanted to move to my Walden and they wanted me to start a temple and a rural community, and if I agreed a hundred more devotees were waiting to come. I was about to be thrust into the fire of ISKCON politics.