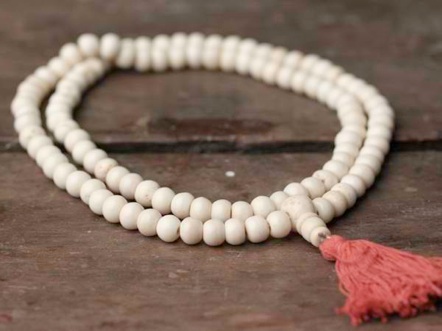 Thank you very much for the wonderful japa mala set that you and your family purchased for me in New Zealand. I consider this a rare and wonderful gift. I am honored.

Let me take this opportunity to write my thoughts on the matter of spiritual purity versus common practicality and where I draw the line between these two issues. When it comes to matters of religion, especially in this country, with the prominence of Christian fundamentalism and now even with Hindu fundamentalism in the form of the Hare Krishna and the Swami Narayan movements, we live in a world where spirituality in gauged primarily in terms of how strict and uncompromising one can be. This is an ideological driven spirituality and it manifests in many forms, including literal interpretation of religious texts, rigid dietary practices, and even excessive forms of religious practice to name just a few. We judge the world as an evil and therefore judge spirituality in terms of withdrawal from worldly affairs. We shun earthly pleasures as being anti spiritual and even evil. In the name of spirituality we deny our earthly needs and create guilt and unhappiness in our lives. We hear the stories of famous saints and sage who have denied worldly desires and thereby achieved great spiritual fame, but when you read the old sacred texts that are all too often locked away from common view because their treasures are held in Sanskrit, we find that spirituality is not so anti worldly and not as removed from practical life as we might expect.

In the Sanskrit Ramayana of Valmiki, a sacred work thousands of years old, we read that when Sita was approached by the demon Ravana, who assumed the guise of a forest hermit, she invited him to sit for lunch saying that soon her husband (Rama) would return with food in the form of deer, iguana and wild boar. (R. 3.47.23) The implication is obvious: she would cook the meat as soon as Rama returned. Sita and Rama, hunting and cooking meat? Did you also know that when the demon Maricha, in the form of the golden deer, approached the cottage of Rama, one of Sita’s reactions was to ask Rama kill the deer so that they could use its hide as a seat in their cottage. She clearly asks Rama to bring the hide of this animal for this purpose. (R.3.43.19-20) I have a deer skin that I often use to sit upon during puja, I am sometimes questioned why I keep such an impure thing. In many places throughout the Ramayana we find the forest sages getting together for an evening that includes meat eating and even alcohol. In one case we read of a demon, in the guise of a sage, who used to coax other sages to his home for a meal and then kill them in a very unusual way. The text clearly says that goat meat was the main attraction. (R. 3.11.57) The impression one gets on reading these passages is that occasionally one sage would acquire a goat and would then call his sage friends together for a “goat-feast.” In other words, it appears that the sages would get together to release a little “austerity tension” by having a good time, and then return to their ashramas to continue their routines of penance and spiritual discipline.

Similarly, throughout the Mahabharata, a similar text, we find sages eating meat, drinking liquors and even having various sexual exploits. And of course, we all know of the gambling habits of the son of Dharma, Yuddhisthira, as he gambled away everything including his brothers, his wife and even himself. Moreover, the Bhagavad-gita, also part of the Mahabharata, tells us that a yogi should sit on a deer skin during meditation. (Gita 6.11) This is clearly mentioned in the chapter which discusses meditation. We also regularly perform thread ceremonies (upanayanam) where a deer skin is wrapped around the boy as he symbolically prepares to enter the forest for education. Where does that deer skin to come from? And how does it relate to the principle of non-violence (ahimsa)? Should I also not mention that most of the sages of the Ramayanaand Mahabharata were married men with multiple wives? Spiritual men with wives in polygamous relationships? What I am pointing out here are practices that today we consider impious or unbecoming of religious people that involve various degrees of meat eating, intoxication, gambling and sex. Both Valmiki’sRamayana and Vyasa’s Mahabharata reflect a certain time and place in the history of early Hinduism. These sacred works mirror the value systems including the morality, ethics and spirituality of their day.

Contrast this with, Tulasi Dasa’s Rama Charit Manas, the often called the“Hindi Ramayan,” which is much closer to our times, only about 500 years old. Effectively Tulasi Dasa rewrites the original SanskritRamayana and “sanitizes” most of the controversial practices of the main characters that I have described above. You never hear of Sita serving meat to Ravana. It is clear that the Hinduism of the past was much different than the Hinduism of the present. It is also clear that Tulasi Das’s Rama Charit Manas is primarily a work of bhakti, devotion, whereas the Sanskrit Ramayana of Valmiki is a work about political power, good overcoming evil, and ultimately dharma. It is not a work of devotion like the later “Hindi” Ramayana. Rama’s status as an avatara of Vishnu is hardly mentioned, whereas in Tulasi Das’s work virtually every page makes it clear who Ram is, the Supreme Lord on Earth.

My point in raising these issues is to show that what was perceived as spiritual behavior in the past is different from what is perceived as spiritual behavior today. We think that a strict vegetarian diet is an essential part of what constitutes being a pious and spiritual Hindu today. You also know that even tea, coffee, onions, and garlic are considered as taboos by very strict Hindus, but did you know that garlic is considered an amrita, a sacred healing substance in Sanskrit medical texts? Can you imagine the sannyasis of ISKCON or the sadhus of the Swami Narayan movements getting together for a Friday night of meat eating and drinking to work off a little “austerity tension”? It would be scandalous and such devotees would be promptly rejected from of the temple, yet our most sacred books are full of many similar transgressions by our most venerated sages. But it seems to me that the diet of Sita and Rama in the forest that included meat was totally appropriate for their location. They were living in a practical way, but what a heresy to even suggest such a thing! And I have little doubt that if Yuddhisthira were living today he would spend quite a bit of time in Las Vegas. We might even think that he had a gambling problem. Again, what a thing to say about the son of Dharma? It is heresy! and yet the texts confirm it.

In fact I would go so far as to say that the older texts like the Ramayana and the Mahabharata represent a more authentic tradition because they are based upon how one might expect real sages to act in real situations. The later bhakti traditions that we have today as found in the ‘Hindi Ramayan’ of Tulasi Das and in the Hare Krishna and Swami Narayan movements are ideological traditions based on the principles of devotion. They sound good and can certainly be held as an ideal, but it is not how real people live in real situations. Please do not misunderstand, I am not making a case for meat eating or alcohol consumption or lose sexual values. Nor I am attempting to rationalize sensual weaknesses.

What I am suggesting is that if one wants to have a lifetime of spiritual practice, one must take personal responsibility for one’s life and be prepared to balance things according to one’s practical needs, and the earlier traditions of Valmiki’s Ramayana and Vyasa’s Mahabharata are good examples of this being done according to time and place. If one takes things too literally or so strictly that one eventually “snaps” and gives up spiritual life altogether, as I have seen many spiritual practitioners do, then what is the point? Religious fundamentalism is an ideological driven form of spirituality that does not lead to happiness, nor, for most people, can it be sustained. I have personal experience in this regard. Perhaps the sages with their occasional “goat-feasts” knew a few things about spiritual life that we need to learn.

So Punam, when you give to me a gift of antique Tibetan chanting beads made of bone, a substance that is considered impure or inappropriate by today’s standards, I am not upset in the least. I am not offended to receive them or even to use them. They may not conform to current standards of devotional piety, but I know that piety is more than how we interpret it today. My views are informed by both the older traditions ofRamayana and the Mahabharata as well as the recent sacred books of modern Hinduism like the “Hindi Ramayan,” and I live my life accordingly. I would not be surprised in the least, if I one day, deep in the pages of the Mahabharata, I read that Vyasadeva himself had a set of bone chanting beads.