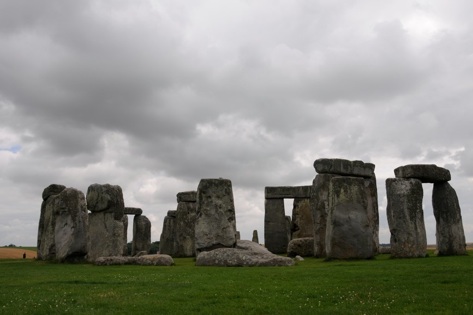 I write these notes while sitting before Stonehenge: A pile of rocks in a field. Yet the whole world is coming here. I hear the sound of traffic to my right and to my left, a constant stream of humanity coming to see a pile of rocks! Ah, but these are not just any rocks, these are Rock rocks. What is most enticing about these rocks is the contrast between the flat plain and the rocks themselves. They appear as if out of nowhere. Where did such an usual outcropping come from? This, of course, is the attraction of Stonehenge. We all love a mystery. But these rocks are only a small piece of a much greater puzzle. There are hundreds of burial mounds throughout the area, similar to the mounds of West Virginia. Although this network speaks of an ancient people that were preoccupied with the sun and presumably the planets and other celestial bodies, nobody actually knows who these people were or where they came from or what these ancient rocks where actually used for. We just do not know for sure. Some say these rocks were created by the Druids as an ancient temple, others say this site is a mystical site, a kind of yogic chakra and, some even say space aliens created these ancient rock formations. As simple as it at first seems, Stonehenge is well worth the visit! (I like the space alien theory of Stonehenge best. 😉 )