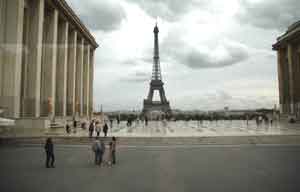 Sitting in London’s Heathrow is a most amazing experience. I had to wait 3 hours for my connecting flight to Paris. London lays on the cusp. It is the last point between the English speaking world and everywhere else. And for me it is the end of the known world. This is my drop off point. Beyond Heathrow I move into uncharted waters. I feel both excited and apprehensive. I sit here listening to French pop music on my mp3 wondering what lays beyond.

I land in Paris’s Charles de Gaul, just to the north of Paris more or less on time, via British Airlines. I did not realize it, but the flight from London is only 45 minutes. You spend more time getting on and off the jet than you do in the air. 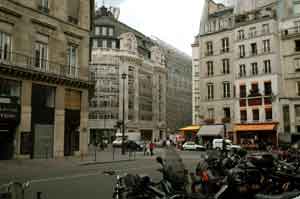 It is so quiet here, not like Heathrow at all. I don’t think there was a single French person on my British Airline flight. I guess they fly only Air France. Heathrow was a bee’s nest of activity. I can see that Charles de Gaul is huge, but where are the people? It is like a village. It does not have the international buzz like London at all. Coming into London from the air I see how hugely populated England is and landing in Heathrow takes you right over the city. It is a most exciting experience looking down. Landing in France, on the other hand, is completely different. The environs around Paris are all rural. France is not at all packed like Britain. And the airport is so quiet. Perhaps there is another part of the airport that is international like Heathrow.

Then I took the train and metro to my hotel somewhere in the downtown of Paris. The 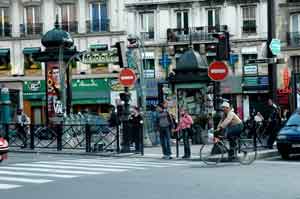 train and Metro ride into Paris was not like I expected at all. I feel I am in New York, only New York is cleaner! I expected a modern and clean subway system like San Francisco perhaps. This place is hard core. I feel that I am in a cold drab northern US city like Detroit. I wonder how safe it is to be here?There is no customs check coming into France, just an immigration check. You could bring anything into the country, less of course all the security things that they screen for when you board the plane like guns and nail clippers! After arriving I changed money with a traveler’s check, and even tried it with an ATM card. No problem in either case, except the ATM card is much easier and I am sure a whole lot more expensive. 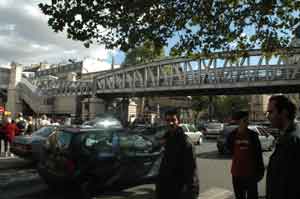 As I step outside of the Metro station and into the world where I will live for the next four days, I feel that I have been dropped off at the corner Bay and Young in Toronto. Crowds of people! So here are all the Parisians. Wow, so many cars, busses, motor scooters, motorcycles and no one will stop for you. I could get killed around here! Streets splitting off in every conceivable direction. And where are the signs? I just stand on the corner of Rue du Faubourg and Boulevard De Labastille for 10 minutes taking it all in. Finally I find where they keep the street names. It is hard to tell what is what. I ask myself what am I doing here? From the peace and quiet of the California desert to here in Downtown Paris? It is like being in downtown Toronto. What am I doing here? lol 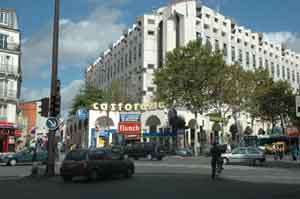 My God, what a trashy place Paris is!. Even New York has less graffiti and less garbage. And the people look so burned out! It is not a sunny place like California at all. It is dark and sombre. One look at the Parisians and I completely understand the lyrics of Mylene Farmer. Paris is unbelievably African and middle eastern, at least in the metro. London, on the other hand, has been given over to Indians. I have never seen so many saris as I saw in Heathrow. I could have been in Delhi. London and Paris have totally different moods. London is polite and clean. Paris is disturbed and filthy. In Britain everyone is constantly apologizing for everything. I have never seen a more polite bunch of people. Paris, on the other hand is, “Get out of the way or I will take aim and run you down”!

And what is with this smoking business? Every one here is constantly smoking. Walking on 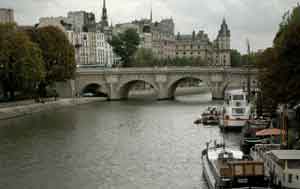 the streets, sitting in cafes, in their cars, and I assume in their homes. Smoking smoking smoking, what a disgusting habit. I bet smoking is pervasive throughout Europe. You can not believe how little smoking there is in America compared to this place. And Canada is even less. Steve, you ooze Parisians. They all have this serious, “been done wrong, life sucks, look”.” I will call it the “Sartre existentialist’s look.” Ha, my hotel is on the most busy street I can imagine. It is like being on Manhattan Avenue in downtown New York. But I have to admit my tiny tiny five star room with the view of the next tenement building twenty feet away is quiet. But don’t worry I am sharp enough not to let first impressions dominate my view of Paris. Tomorrow I will begin looking for the soul of Paris.