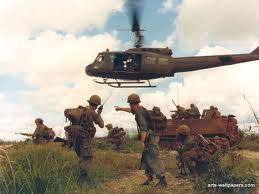 Growing up as a teenager I watched the Vietnam War on television. Night after night I witnessed the carnage of our American brothers. In those days I lived in Canada, so I was in no danger of being drafted and neither did I know anyone who went to Vietnam. It was not my war. In spite of my aloofness, this war weighed heavily on my mind. What was United States doing in South East Asia? We were told that America was protecting Canada and the rest of the world from the “communist menace.” We were also told that if America lost this fight, Communism would dominate the world. America lost, but communism did not dominate the world. I learned an important lesson.

These days I feel similar about the Iraq war. This war weighs heavily on my mind, only now I live in America. This time it is my war. In the beginning we were told that the war was about weapons of mass destruction (WMDs). The Secretary of State stood before the world at the United Nations and showed detailed photos and diagrams of these WMDs and their delivery systems in Iraq. He made a compelling case to go to Iraq, so we went to war and I reluctantly agreed as did most of the country. But not a single WMD was found and we are still in Iraq. Now we are told that we are fighting the global war on terrorism and that if we do not fight the war in Iraq we will fight the war in the streets of America.

In fact, the average person has no way of knowing what is true and what is false when a government wants a war. WMDs, global terrorism, or communism can all be made to sound like good reasons by a determined government. Day after day a government and its supporters pound the country with propaganda about why a war is necessary. Opponents fight back with counter propaganda, but the average person is always at a loss to know the truth of the matter. Without facts no informed decision can be made and so the average citizen is forced to trust the intentions of his government. This is how I felt as this country made its decision to enter Iraq over weapons of mass destruction. It was a decision made on very specific conditions: that there were weapons of mass destruction. But there were none. Now, we are told a completely different reason for our continued presence in Iraq. We are fighting the war on global terrorism and spreading democracy in the Middle East. This sounds like an argument for the Vietnam War.

This week a light appeared in the night. A panel of senior bipartisan government leaders issued a report on the Iraq war along with their recommendations how the US should proceed. What a breath of fresh air! For the first time we are hearing some intelligent assessment from a group of mature individuals representing both sides of the political spectrum. And what are they telling us? “The situation in Iraq is grave and deteriorating. There is no path that can guarantee success, but the prospects can be improved…” In short the report tells us that the situation is a no win situation, but that if we follow certain recommendations we can minimize our losses and withdrawal from Iraq in a respectable way. In other words, this panel recognizes that we went to Iraq for a specific purpose and now that that purpose is no longer valid we should leave. Under the weight of government propaganda the Vietnam War dragged on for years more than it should have, costing the lives and energies of people on both sides of the conflict. I hope this intelligent informed and mature report will prevent our government from repeating this mistake in Iraq. It is time to get out and if we fail to do so in an intelligent and deliberate manner we will again watch with horror and humiliation as the last helicopter leaves Bagdad like it did years ago with the fall of Saigon. I ask our president to listen to the wisdom of his elders on both sides of the floor.