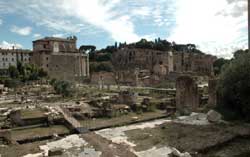 My first stop today was the Pantheon. It is an ancient temple to various Roman deities. The place is small, but absolutely magnificent. It is a combination of weight and lightness. It is an amazing structure. Once I entered the structure I was horrified to learn that it had been converted into a Christian church. This upset me no end. How dare the Catholic church defile this sacred and grand structure with their God. I also noticed that they placed a huge cross on the side of the Colosseum. How dare they! It is one thing to copy the classical architecture of ancient Roman to built their own cathedrals, but quite something else to defile this ancient art with their rubbish. I dislike the arrogance of Christians, They think they have some exclusive on religion and spirituality.

You can clearly see that ancient Rome is many meters lower than present Rome. Anytime I visit an ancient site it is always below ground level. Sitting in the remains of the biggest excavation site created an amazing feeling. Who were the people who built this city? They must have been giants. 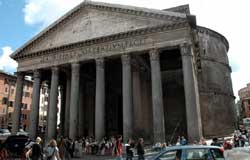 The colosseum is massive both on the outside as well as on the inside. All of what I have seen is amazing. How did they move such massive blocks of stone? As you know I build a few things and so I pay attention to construction, but what these people have done is incredible by any standards. The ancient Romans must have been quite a group of people. In fact, just about everything I have seen from Paris to Rome to Florence has been built or painted or sculptured with war and exploitation laying somewhere in the background. The Romans had slaves, the principle Christian inspiration begins with a crucification, then the Christians had crusades, and an inquisition, Napoleon had his wars etc. All the art I have seen has war, slavery, or exploitation behind it. Ah this is the human condition. It seems that much of art and wealth arises from someone’s destruction or subjugation. What a pity.