You are, of course, aware of the huge controversy unfolding in this country regarding Islam in America. Certain Muslim groups in New York City are proposing to build an Islamic Centre including a Mosque at the site where the 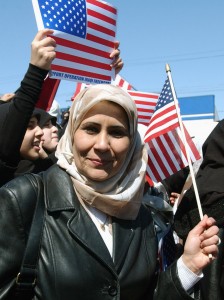 world trade centers was destroyed by Islamic terrorists. Understandably, this has become an issue of contention in this country to the point where even the president has spoken out on the matter and given his opinion that Muslims are protected by constitutional rights that guarantee religious freedom like any other religion. While I heartily agree that Muslims should be treated in the same way as other religions, and they do have the right to purchase property and establish religious institutions in accordance with local laws, the feelings of the local community and the mood of the country must be taken into consideration. Even though the Muslim community has the right to have an Islamic community center, their attempt is in discord with the mood of the country. While this may be unfortunate for the Islamic community in America not to have its community center and mosque in this location, the current situation affords a huge opportunity for Muslim Americans to promote their religion not only in America, but throughout the Western world. There is now a golden opportunity for the leaders of the Muslim community to face the nation and say, “We know our religious freedoms are protected under the United Sates constitution and we know we have the right to build this Islamic center and mosque, however, given the unique circumstances surrounding the events of 9/11 and the feelings of the local community and the nation as a whole, we have decided not to locate our center in this location at this time.” If the members of the Islamic community took this approach they would score a public relations victory and engender a huge amount of goodwill from the American public. This would be Islam showing a new face not only in America, but to the world.

The American public still has not made a decision about how Islam is going to be accepted in this country. Americans in general want to be open and accepting, but so far the message they are getting from the Islamic community is not good. A gesture to withdraw the proposed islamic center and mosque from this location would show empathy with the feelings of this country and go a long way in presenting a new face of Islam to the world.

So the question is simple. Are the Islamic leaders going to force their religion on the American public using the same laws that protect their religion, or are they going to show understanding and sympathy with the sentiments of this country and waive their rights in order to achieve a higher cause? Will Islam take a confrontational approach or will it try to gain the support of the American public? Islam is at a crossroads in America.