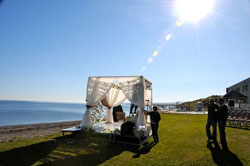 One of my purposes in coming to Canada was to perform a marriage in the province of Quebec; that has now been done. Coming here, hundreds of miles northeast of Montreal, to the far reaches of North America, was not only a unique place to visit, being right on the shores of the Saint Lawrence River, an extremely picturesque landscape, but also an immersion in the French part of Canada. I did not grow up in French culture, but I did grow up near French culture and at a time of great English/French turmoil. So coming to Quebec, in an indirect way, is coming to my roots. 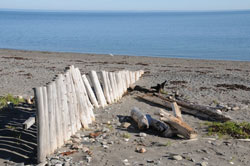 I was shocked by how much English is not spoken in this part of Quebec. I met a whole generation of youth, who hardly know a word of English. This is almost inconceivable to me. Every child attending school in Canada is required by law to learn French, even if they live in a part of the country where French is never spoken, which is most of the country, but it seems children attending school in Quebec, the French part of the country, do not have to learn English! This astounds me because it means the French in Canada, in their zeal to preserve their language and culture, have condemned generations of French Canadians to economic strangulation and cultural parochialism. I was picked up at the airport in Mont Joli by a 22 year old youth who spoke no English, and who did not even care to learn. I was returned to the airport by another youth who realized his handicap and who felt trapped, not knowing how to learn English unless he traveled away. I’m trying to learn French, he’s trying to learn English, but we both have no place to practice our language skills. His problem, however, is serious and mine is just an annoyance. His future is at stake and he knows it. The first youth was content to just be French and live outside the mainstream of North American culture; the second youth was deeply frustrated. And they both admitted that without English they could not survive properly even in Montreal. Is this what the federal government was forced to agree to when they granted special nation status to Quebec? 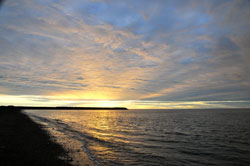 Sunset on the Saint Lawrence

In other matters, I performed the wedding nicely weaving the two cultures together in my usual fashion. I put square pegs into round holes. However, I failed miserably in my attempt to perform the marriage in French the way I wanted. In the last minute I caved in and took the help of a translator. The night before I successfully performed the marriage in French, in my mind, but when the moment of truth came, standing in front of two hundred non English speakers, on the most important day in the life of the bride and groom, I chose not to attempt the job myself. I probably did what was best for the bride and groom, but I did not do what I wanted. I am disappointed with myself because it means that I am still at the level of speaking to animals, and not yet to people, especially in a formal setting. Being in Quebec, immersed in French culture, I have periods of French lucidity. Give me a few weeks of prolonged immersion and I could cross that line at will, but having to worry about running a fire in the wind, moving the bride and groom through their paces, chanting Sanskrit prayers and providing commentary, I just could not add French to the mix. It was too many balls in the air at one time. I am sad. 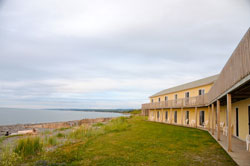 This area of Quebec is cold country. I am told there are bear, moose and even wolves here. I only wished I could have seen a moose or heard the haunting howl of a wolf. I am a lover of the wild, of nature in its pristine condition. My father instilled this love within me as he took the family into the bush of northern Ontario every year for camping. I can never erase the cry of the loon or howl of the wolf from my soul. I can never forget the majesty of seeing a bull moose raise its head high to test the wind. I can never forget the magic of seeing the northern lights on a dark winter’s night out on a frozen lake. These things are inscribed into my very being, and for such reasons I also seek the solitude and wildness of the California desert. Coming to northern Quebec, seeing the endless chain of lakes, and the color of light in the northern summer morning reawakens my soul to the beauty of nature that is so difficult to find in my man-made world that I am compelled to work in. I spend much of my time in the finest hotels in the world, but here on the shores of the Saint Lawrence, with the water not more than thirty feet from my broken down old patio, I found a few moments of that same magic that I once knew as a child.