↓
Home Menu ↓
Skip to primary content
Skip to secondary content
Home→Blog→Memoirs→Krishna Consciousness→Meeting Krishna For the First Time
The climate’s delicate, the air most sweet, Fertile the isle, the temple much surpassing. The common praise it bears.* 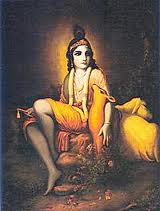 During my summer in the Northern Ontario bush I made a friend, although I can not for the life of me remember his name. Even though I only knew this youth for a few weeks in the Sultan camp, he had a powerful impact me. Perhaps his sole purpose was to deliver me to Krishna. This was the same friend who was going to ride with me from Winnipeg to Toronto by touring bike, until my father intervened. This youth was unlike the rest of us in Sultan. We lived in the suburbs. He lived in the city. We were suburban kids. He was a city kid. In those days my parents had never allowed me to venture into the downtown area of the city, This friend became my gateway to downtown Toronto and to Krishna Consciousness.

During our time in Sultan we had many talks about philosophy and spirituality. The topic of Krishna always came up, so we both resolved to meet the Hare Krishna people as soon as we returned to Toronto. He had actually seen the Krishnas chanting and dancing on the streets. I had not. Within a week after returning to the city we paid a visit to the Krishna temple. Without the help of this friend I would never have ventured into the downtown. The temple was not in a good part of the city. It was in skid roe, the alcoholic’s area.

We arrived at the Krishna temple on a Friday evening in September of 1969. The devotees 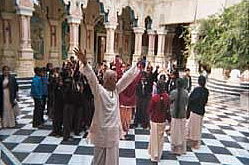 were hosting a program of chanting, lecture and dinner for new people. Anna, unless you have been to India or have visited a Hindu temple it is difficult to describe what one sees. There is the overwhelming smell of incense, the ringing of bells, the blowing of conch shells and the sound of Sanskrit chanting. In this temple I saw many young men with shaven heads and “paint” on their foreheads and noses The paint is actually a sectarian religious mark made from clay. The ladies wore Indian saris and ankle bells. The worship area was a well lit room with a wooden floor and an altar that covered the whole front of the room. The altar space was separated from the rest of the room by a marble floor and a rope that blocked visitors from walking onto the altar. Priests alone were allowed on the the altar. There was an assortment of Hindu Gods in the form of wooden, metal and stone images. On all sides of the room hung the pictures of scores of Hindu Gods supporting hundreds of heads and arms and legs. It was an overwhelming sight. My friend and I sat through the evening and listened to a Bhagavad Gita class. We even tried a little chanting, and afterward shared an Indian vegetarian meal that the devotees called prasada, God’s grace.

But the most incredible thing about this evening was not what happened inside the temple, but what happened outside as I left. The second I stepped outside of the temple I fell into a fit of uncontrollable laughter! I was so beside myself that I could not stand. I literally fell to the ground and laughed tears of joy. I laughed and laughed and laughed. My friend was totally taken aback by such madness and desperately tried help me find composure. My outburst must have lasted fifteen minutes. Anna, I am not an emotional person and such public displays of emotion almost never occur in my life. But this feeling was all consuming. Like the joy of meeting an old friend after many years, I felt complete and utter abandonment. Something deep within me had ignited and my life was forever changed. I have never forgotten these intense feelings of joy.