Pope John Paul II was remembered Saturday as a “champion of human freedom,” a 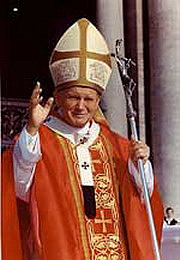 “tireless advocate of peace” and a man with a “wonderful sense of humor.” He died Saturday, aged 84, after a long battle with Parkinson’s disease and crippling arthritis. “We will always remember the humble, wise and fearless priest who became one of history’s great moral leaders.” This is the statement President Bush made regarding Pope John Paul II.

The passing of this pope has been huge story in the media. There has been 24 hour coverage. Without a doubt this pope touched the heart of many people. The media is already calling him Pope John Paul, The Great, and no doubt, he did many great things.

Yesterday, Tuesday April 19, 2005 a new pope, Benedict XVI, was elected. Again the media coverage was intense. The general perspective is that the previous pope was great and this new pope is ultra conservative. Only time will tell the real story. From my perspective I object to the media’s implication that the popes of Rome speak for all of humanity on matters of faith, ethics and morality. With the passing of John Paul II and the election of a new pope the issue of religious authority has come to my attention.

It is, of course, natural that during a time of loss and bereavement people will want to say and hear favorable things about a person, especially about a pope who reigned for so many years and truly did impact the life of many people. However, I remind myself that this past pope and his now successor stand for a 2000 year old religious tradition that is tainted with many wrongs in the name of what is supposed to be divine. The crusades, the inquisition and the churches dealing with science come to mind as a few examples.

The basic premise of Christianity is that the message of Christ is the true message of God, and the premise of Roman Catholicism is that the Church of Rome is the true arbiter of that message, even to the exclusion of other Christian faiths. Of course, this raises the issue of religious authority within a given religious tradition and between different religions. Most religions assert to some degree that their particular faith is the real truth and that other religions are either outright wrong or are only a partial manifestation of truth.

The past pope, John Paul II, has been credited as being open to other faiths. It is true that he forged alliances with other branches of Christians, that he was the first pope to pray in a mosque and that he opened a dialogue with Judaism. These are indeed liberal gestures, but let us not forget that it has taken his church 2000 years to come to this point. Hinduism and Buddhism have never had a problem acknowledging the validity of other faiths. And now that the Roman Church has opened its door of tolerance to other Christian faiths and even to Judaism and Islam, how far can it open its door to a non monotheistic faith, such as Hinduism or to a non theist faith such as Buddhism? Not much, believe me. This was seen when the pope visited India. He simply tried to convert as many Hindus to Roman Catholicism as he could. So I am not impressed by the liberality of this past pope or the Roman Catholic Church or of Christianity. And as far as his ability to speak for the morality of humanity, I would like to see the church accept the validity of my faith first before it presumes to speak for other aspects of my life. Roman Catholicism has barely embraced the rest of Christianity, so how can it embrace all of humanity?