Snapshot by snapshot I am laying a foundation of understanding. Before you can comprehend the specifics of my life at this stage you need to know the philosophical and theological context of my life. So we discussed maya; I now want to discuss Hari Nama. I

hope these small segments are palatable.

Another story: There was a sage named Hari Dasa. (Hari is a name for God and Dasa means servant, thus Hari Dasa means servant of God.”) Hari Dasa was actually a Muslim, but somehow he had become attracted to the Hindu deity, Krishna. In fact he was famous as a devotee of Krishna and used to sit alone in a cave and recite the names of Krishna. His vow was to chant 300,000 names of Krishna daily. This act of austerity took most of his day so he had just a few minutes to eat and bathe each day. The local king was a Muslim and when he heard that Hari Dasa was actually a Muslim, who was worshipping a Hindu god in his kingdom, he became incensed. He decided to ruin Hari Dasa. Of course we know the best way to bring down an ascetic, use a woman. So this muslim ruler employed the services of his most beautiful courtesan, Mayadevi. (Devi means goddess). Dressed in her most attractive outfit Mayadevi approached the cave where Hari Dasa lived. Unlike the sage Vishvamitra, Hari Dasa was wide awake and sitting outside of his cave chanting the names of Krishna on his beads. Hare Krishna, Hare Rama was his prayer over and over for hours on end.

When Mayadevi approached Hari Dasa he gave her a big smile and asked how he could serve her. Very sweetly she told him that she would like to make love to him and would he be agreeable? Hari Dasa was delighted to hear this proposal, but he said that he would first have to finish his daily routine of chanting. He asked Mayadevi to sit before him and wait. 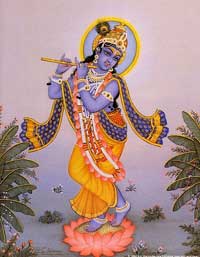 Mayadevi waited while Hari Dasa gently chanted his rounds aloud. Hours went by and it soon became too late to act on Mayadevi’s proposal, so Hari Dasa asked if she would come back the next day. For sure he would make love with her at that time. Mayadevi returned the next day and sat before Hari Dasa as he again chanted his rounds on his beads. Unfortunately it became late and they could not make love. This occurred on the third day as well.

By the fourth day Mayadevi was beginning to experience a change of heart and started to chant the names of Krishna along with Hari Dasa. If fact the heart of Mayadevi was becoming overwhelmed with feeling of love for Krishna. Tears of joy erupted from her eyes. She was becoming a devotee of Krishna herself. In the end she revealed to Hari Dasa the reason for coming to meet him. Mayadevi herself became an ascetic and gave up her profession as a courtesan. The muslim king soon came down with leprosy due to his evil desires against Hari Dasa. So what is the strongest force in the world? It is not woman, but the names of God. Maya had been turned into a devotee. The master of maya is Krishna.