I did not wake up until 10 AM and by the time I showered, had breakfast and consulted with the concierge, it was noon, but Madrid only seems to get going by that time. I have never seen a city that opens so late and stays up so so long, and I don’t mean just bars, every museum and art gallery is open till 9PM, and restaurants only start filling up after 10, for food, not just drink! One never has to worry about sleeping late while in Madrid. Whether this is true for the rest of the country, I have no idea, but I like it. 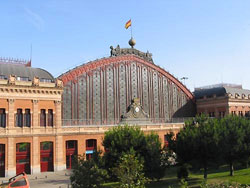 Once I did get going my first trip was to the train station to buy a ticket for Barcelona. However, being in a foreign country for the first time means that even buying something as simple as a train ticket is not an easy matter. One first has to know where the station is and even how to use a bus. Yes, I could have easily taken a taxis from my English enclave, the hotel, but I always insist on doing things the indigenous way. I want to be with the people. This is where one’s concierge is extremely important, you at least get a directed push out the hotel door and you are armed with at least some hint of where to go and what to do. After that you are on your own.

Madrid’s main train station is called Atocha, and what a place it is! This is the station that 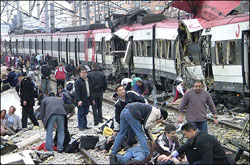 was bombed in 2004 just before the Spanish elections. This is the place that forced Spain out of Iraq and drove a wedge between active Spanish support for American actions against Sadam Husain. It is an eery feeling to be in a place that was in the grip of death and destruction just a few years before. A hundred and ninety-one people died and over 1800 were wounded on that day, and here I was! But what got me the most about being here is that Madrid does not look like “some other place.” Athens, Rome and even Paris look like that other place and so you might expect, a bomb blast, but not here. Madrid and the Atocha, looks too modern, too much like home, for something of this magnitude to have happened. 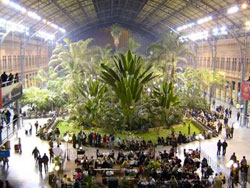 The Atocha is a huge glass structure filled with shops, cafes and even art galleries nestled amongst trees, ponds and running brooks. It is almost a botanical garden. There is nothing like this I have seen before. And it is clean and absolutely efficient. One can arrive here, pass through security, and be on a train within fifteen minutes, if one has a ticket. For me it was another story. Not a lot of English is spoken in Spain, unlike the rest of Europe, so it took over an hour just to find an English speaking ticketing agent, but once I did, I booked two trips, one to Barcelona and one to Seville. The girl at the ticketing counter herself was from Seville and so she even made a personal phone call for me to check if the day I was traveling on was a good day for museums. That would never happen in the states! She also talked about how Madrid was so cosmopolitan 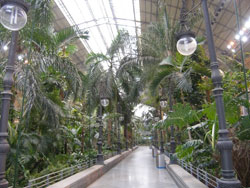 and fast paced, but to me it is like a village, a very nice village, and I reaffirm my opinion that Madrid is a monoculture. Relatively speaking, this is a white Spanish speaking world, without a large immigrant population compared to London or Paris. At the Atocha I spent the whole day in downtown Madrid and saw few immigrants. Madrid is a solely Spanish world unlike the rest of Europe.