I’m sitting in a small restaurant just across from Gaudi’s cathedral. Having been in the cathedral all afternoon I am in a state of awe. I have never seen anything like this. It feels like I was just in the Notre Dame or Chartres cathedrals 900 years ago during their construction. Having been involved in temple construction for so many years brings this project very close to my heart. I felt I was watching history in the making. Gaudi’s cathedral was started in the late 1800s and today, over a hundred years later, the construction is still continuing. In the cafe where there is a photograph of the cathedral dated 1906 showing the construction site surrounded by herds at goats. In those days it was completely outside of the Barcelona. I took an audio tour and learned that the church was actually burned during the Spanish Civil War. Even Gaudi’s original plans were lost. In spite of the stops and starts during the first and second world wars and then again during the Spanish Civil War, still I wonder why it is not finished. I can understand a cathedral being built during medieval times taking a century or even more, but why should construction take over a century in this day and age? The inside of the cathedral has scaffolding everywhere. In fact this creates much of the mystik and wonder of the church. You can see the various phases of construction. It is obvious what has been done in recent years compared to 75 years ago. The complexity of detail and design that pervades this cathedraI varies a lot and I am sure many people look at this place as a monstrosity. It is just so unusual. Regardless, the building is a wonder and I found it inspiring. It is a living building that one feels the moment you enter! The body of Gaudi is even buried within the crypt. Even though the cathedral is only half complete it dominates the Barcelona skyline. It as an architectural wonder and I was very glad that I came to vist. 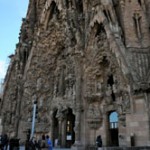 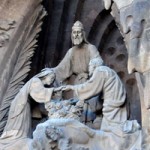 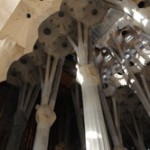 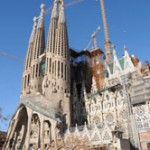 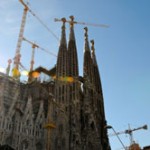 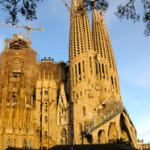