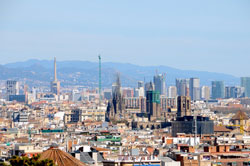 I spent the day in Barcelona; I am tired, but happy. Barcelona is very different from Madrid mainly because of its climate and proximity to the sea. My first impression stepping out of the train station was that it was dirty and rundown. The thought of a Mexican city flashed through my mind, but having toured the city and walked the streets, Barcelona is nothing like anywhere in Mexico that I have seen. Barcelona is clean and modern, only the train station area is a little ragged. Instead Barcelona reminds me of Nice, France or Santa Barbara in California. I took a bus tour around the city and made a number of stops including a small Picasso museum, the old city 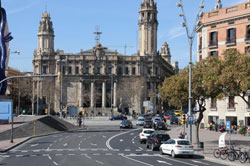 district, the Gaudi Cathedral, a restaurant and the metro. Barcelona, of course, deserves a lot more time; it is a huge place, but this was a day trip and my time was limited. For shopping I walked through the old city area. This district, like in Nice, has been cleaned and modernized and made into a first rate tourist area. It even includes the old port and lots of walking paths along the sea. This reminded my of New Port Beach in California. As part of the bus tour we drove up Barcelona’s Montjuic hill that overlooks the city. This is the home of the Museu d’Art de Catalunya (Catalonian Art Museum), Unfortunately, I did not have the time to tour this museum. Probably a big mistake. I did however, get a few photograph that show the 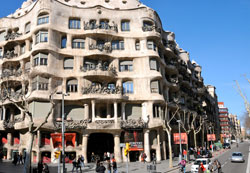 An apartment complex designed by Gaudi

skyline of Barcelona. Apart from the Gaudi Cathedral I did not see a lot of things of interest to me. Near the cathedral I did see some political activity. There was a large banner reminding tourists that Catalonia is not part of Spain. I try to stay away from this kind of activity while traveling, but I did snap a photo of the banner. It was good to walk through the old parts of the city, but again, it is too much of a tourist area and reminded me of where I live in California. Overall my trip to Barcelona was enjoyable, but apart from Gaudi’s cathedral, not particularly interesting to me. It was good to see the Spanish countryside traveling from Madrid, but the trip left me feeling that I had not gone anywhere. It was too much like where I already live. One last comment, the population of Barcelona appeared similar to Madrid, white, European, and Spanish.