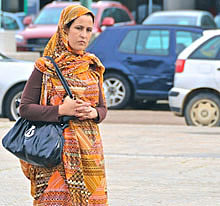 One of the problems with Spain is that it just looks and feels too much like home. Madrid is a beautiful city, but it just looks too new and modern. There is a dearth of old-world feel. In fact Madrid feels like a North American city, a particularly nice one, but a North American city just the same. In fact it is better than any city in North America because it has a fantastic transportation system. Don’t miss understand, Madrid is about museums and for this reason alone it is worth coming. Barcelona also reminds me of a medium sized California city like Santa Barbara. Its a wonderful tourist city by the sea and certainly a place worth visiting since I am here in Spain. But my trip down into the south of Spain is a search for the Europe that has been missing, that something “other.” And I am not to be disappointed! In Seville I finally met the Spain I wanted to see. 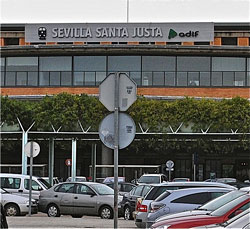 On the way to south I notice a lot of wind turbines and solar arrays in the Spanish countryside. Outside of Madrid the countryside is green and highly agricultural and it appears prosperous, even more so than east towards Barcelona. In both cases the land is generally flat within 100 miles of Madrid. About an hour outside of Madrid the land become hilly and the towns begin to look more Spanish. Two and a half hours out I begin to see palm trees. I am coming close to Seville and the towns and homes look decidedly Spanish. Madrid looks European, Seville looks Spanish. Seville definitely has that that southern European look and feel. Everything is less urban. Probably the most noticeable thing is that the weather is much warmer. As I step out of the Seville train station I am greeted by a woman dressed in what appears to be a sari like outfit. I am in the Andalusia region of Spain. I have finally gone somewhere.