As I arrived in the Seville train station I had no idea of what I would do or where I would go other than to simply find the downtown area and take a bus tour. In other words, I was here with no plans other than to just arrive and let things happen. This is how I often travel. It is partly a philosophical position and partly out of practical necessity. It took most of my energy and time just to get to Spain, there was nothing left over to know what to do once I arrived. Philosophically I travel as Le Flanuer, the City Stroller. Little English is spoken in Madrid and even less in Seville. To compound the problem there are few tourist stands in Seville. Moreover it turns out that the city has no tour buses, at least not at this time of the year. So after an hour of confusion and a profuse number of hand gestures I boarded a bus for the downtown area, specifically into the Santa Cruz Barrio, old town Seville. 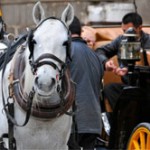 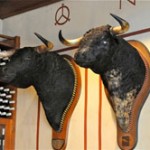 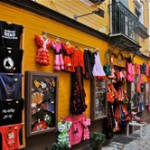 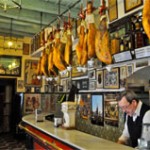 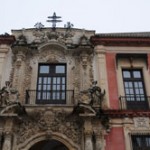 Walking into this area is fantastic! It is like old town Nice in France, except it is much larger and it has a unique gypsy-flamenco feel without the cheap tourist influence. Finally I’d gone somewhere other than just to the Getty Museum in California or to the beach in Santa Barbara. In Seville bull culture rules. Every bar seems to have an assortment of mounted bull heads. In the States we mount deer heads, in Spain they mount bull heads, big bull heads! It seems every shop sells t-shirts, blankets, clothes, and other items exhibiting fully virile bulls. Next to the bull shops are the Flamenco shops and bars. Fantastic dresses, fans, castanets and other accessories of flamenco culture abound. The Santa Cruz barrio is a photographers paradise. It’s a maze of tiny streets and gullies filled with colorful shops, cafes, bars and apartments on all sides. It’s is amazingly clean and well organized. Thank God for my wireless with its GPS without which I would still be wandering in this barrio, lost for eternity. Hidden within this area of the city I eventually discovered a magnificent church, the Cathedral of Seville, and then the Real Alcaza, the Royal Palace of Seville. These two structures are absolute gems of architecture and culture and I had no idea they even existed. I will write about these places in later installments. What I saw in Seville in just a few hours was, I suspect, just a tiny tiny taste of what exists in other parts of Andalusia. I want to return and I want to see more.

That day I was only able to spend nine hours in Seville, and as my time came to leave it started to rain. I took shelter in a tiny cafe just across from the Real Alcaza, the royal palace and this is where many of these notes were written or edited. I sat for almost two hours having an enjoyable time watching the rain come down and watching life in this wonderful are of the city.