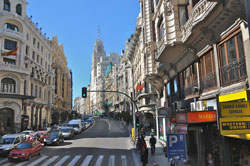 I spent my final day packing, arranging my boarding pass, taxi, and everything else necessary to leave Spain the next day. It was not raining on this last day, in fact it was even sunny, so I wanted to spend my time seeing Madrid the way I had hoped on the first day, by tour bus. The weather made that impossible, so now was the time to take the tours and arrange to buy gifts at the same time. After talking to the concierge about where to go I decided to walk into old town Madrid to buy gifts first. Afterwards I would take the bus tours. 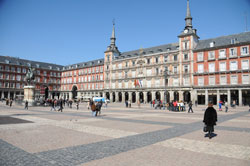 Walking to old Madrid makes me wonder why they call it old town. Nothing looks that old. The streets are not tiny. Everything is clean and orderly. People even obey the the street signs and lights. I’ve said it before, Madrid is more like a North American city than a European city. I am surprised by this. Even the emergency vehicles do not have that typical European siren sound. Instead the sound is like a North American emergency vehicle. 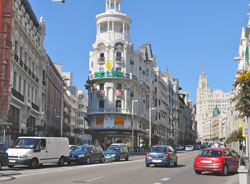 I walked through the Plaza Mayor in old town Madrid. It is a large square plaza with shops on the ground floor and apartments all around. Lots of them! You can see the photos. I bought my gifts here, mostly flamenco fans and castanets, and the most amazing thing of all is that they are not made in China! Even the Hindu gods we get in the temple in America come from China these days. After this square I walked to the botanical gardens near the Prado Museum. There are a lot of police in the streets of Madrid and even a good bit of military around the government buildings. The soldiers have machine guns. The gardens are fantastic and they must be incredible in the spring and summer. They are large and well organized, but nothing is in bloom at this time of year. After that I took a bus tour and near froze to death. But still even though it was cold on the upper deck of the bus I managed to get a good tour of Madrid. Everything is beautiful, just not old. Even the oldest buildings are relatively new, only going back to the 17th century. After the tour I stopped for a late lunch and returned to the hotel by 6 PM. It was a good way to end the day. I will have to get up at 3:30AM for a 7:10 flight to London.

I had a wonderful time in Spain.