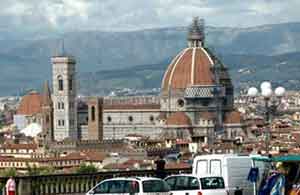 While traveling from Paris to Rome, my traveling companion made the comment that Italian food was not as sophisticated as French cuisine. I think his use of the terms food and cuisine sum it up. At the time I did not understand what he meant. I do now, and I want to extend the comment to the whole country. Italy is basic and earthy. France is more complex and aerial. In Italy the forms are square and flat, while in France they are rounded and multi dimensional.

I took a tour in Florence that drove me around the city and even into the local countryside.Florence is like a maize with its endless alley ways. I could not use my map to find my way; a compass would have been more useful.

With all the alleys Florence reminded me of India with its limitless gullies. In general the building facades are flat and angular being built of brick in numerous earthy tones. The tour guide described the many villas and palaces as gorgeous, but having come from Paris, I did not think so. They looked plain to me. 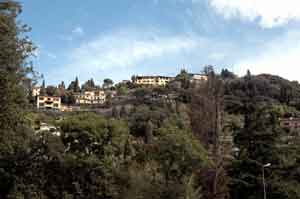 Villas in the hills

Of course, Florence is the land of the Tucani artists, so you see that style everywhere. I prefer France, but in its own way Florence is a beautiful city. There are two churches that I saw, which are flat and square, but certainly not basic, the Duomo and Santa Croce. These places are absolutely incredible. Their facade are covered with unbelievable detail that reminded me of a south Indian temple. Surprisingly their insides are plain and unadorned.

The villas and homes around Florence are built on hillsides that remind me of Malibu. We drove to a wealthy area outside of Florence called Fiesole that was most beautiful. The whole area has a strong southern California feel. 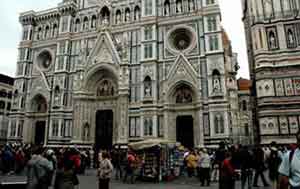 Compared to Rome, Florence is a tiny place, but it is just crawling with tourists. It seems that there are more tourists than local residents. You feel more safe here. Rome, of course, has many more tourists but they are easily swallowed up by the sheer size of the place. I am frustrated that I can not get my photos to show more color, but I think this is just the way it is both here and in France. The colors are dominated by grays and whites, plus the weather is rainy and gray.