There are two ways to touch your nose. One is to just touch it directly from the front and the other is from behind your head and around. Some countries follow the direct way, others follows the indirect way. 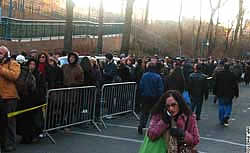 In America, for example, if you want to buy something, you just buy it. In general, whatever it says on the price tag is the price you pay. Done. In India, on the other hand, you must haggle for almost everything, including taxis, shoes, clothes, cell phones, and even tooth brushes. In India nothing is easy. Just to take a taxi is so much work because you must first negotiate a price, then make sure the driver does not cheat by taking a longer route. Then when you arrive he will want to renegotiate the price, so you must fight it out over that. In America everything generally works. The water always comes out of the tap. The electricity is always on. The subways always operate and if you take a taxi the driver will never have to stop for gas or to fix a flat. In India things generally never work properly. Water only comes at certain times of the day. The electricity always fails. Buses are regularly on strike. There is always some public emergency and your taxi will always need gas and it will have a flat. France follows the “american” way and Italy follows the “indian” way.

This morning when I went to take the subway to the Vatican, the subways and buses were not working because of some public emergency. At first I was ready to pull out my hair when one Italian gentleman said, “Whata is the biga deeal, just takeka the back way by the treni.” Oh, that made sense. It took three times as long, but I arrived at the Vatican. Happy.

I hear the whole country is going on strike this Friday. The Italians say it is no big deal, it happens all the time. Just stay home and sleep. This sounds so much like India! There is always a strike, or some revolution going on. This is what I mean by the indirect method. On the train I was telling another Italian man about the subway and bus shut down and about the up coming strike. He looked at me and said out loud, “Yes, we Italianos are a very specialo people. We a like it this a wayo.” The whole train car burst out laughing. They all knew it was true. Italy does not work that well, but no one cares. They are happy, easy going and flexible. This is India as well. So while in Rome, do as the Romans. I am starting to relax and have fun in Italy.