It is hard to describe the thrill of walking into Saint Peter’s square for the first time. I have, of course, seen the images on television many times, particularly after the death of the recent pope, and suddenly I was here. I love this feeling. All over Paris and Rome I am seeing things that I have seen in books and on the media for years and now I am seeing them in person for the first time. It is exciting. You feel a rush. I want to travel more and more. My camera is my greatest traveling companion.

As far as cathedrals go, Santa Pietro, Santa Paulo, Notre Dame of Paris and Chartres Cathedral are huge tourist attractions. I see the people coming in the thousands and most of them coming are coming as tourists. There are, however, many pilgrims as well. Watching the tourists is particularly interesting. They come all dressed in festive colors, shorts for men and even short dresses with low tops for ladies. They are talking and joking and have mp3 players and yet, as they go through the cathedrals, I see them become transformed into pilgrims. They enter the cathedrals in a loud and “frivolous” mood and as they exit their mood has become grave and silent. The power of the architecture changes them. For my part I a pilgrim. I am humbled at entering these sites. I consider it an honor and privilege to be here. For me these cathedral are sacred sites.

The cathedrals in Rome are particularly about the worship of God as a king, as the emperor. It is imperial religion taken to the highest degree. Paris was similar, but Rome as taken it way way beyond what you find anywhere. In our Sanskrit language we call this aisvarya-bhava, the mood ones feels from worshiping in an imperial way. The opposite is madhurya-bhava, the sweet mood of worship. The worship of Krishna as a simple village child stealing butter is madhurya-bhava. When a crown is placed on God and He is worshipped on a throne, this is imperial worship, aisvarya-bhava.

Rome is imperial worship all the way. Spiritually, no cathedral in Rome has touched me as Notre Dame did, but still it is hard not to be impressed by what I see here. I was more at home in Paris, but I would not want to miss any of what I have seen in Rome for the world. This is something that everyone, believer or not, should see at least once in a lifetime. The grandeur of Santa Pietro and the Cistine Chapel is beyond description. It is breathtaking. You can see some of my photos. What I have seen here will remain in my mind and heart for the rest of my life.

At the same time, as I see all this imperial religious power here in this seat of the popes, I am reminded of my ISKCON background and its religious governing authority. I come here, I appreciate what I see, but I also know that to live in this religious world of Roman Catholicism is to put oneself into an intellectual and spiritual box. I have done that once in my life already and I have no desire to be a part of any of this religious grandeur. It is seductive to be sure, but I know better having been down this path. Apart from the size and age, there is no difference between the leaders of ISKCON and the leaders of the Roman Catholic Church. The Roman church is just a very old, big and successful cult.

Toward the the back of the cathedral and deep underneath there is an area where many deceased popes are resting. The stairs down into this area are long and steep. This place is quiet and mysterious with a slightly ominous feeling. There I found the resting place of the late pope John Paul. His crypt has a modern “pleasing” and safe look, while his predecessors’ have a cold and skeletal look. This is modern packaging. 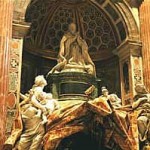 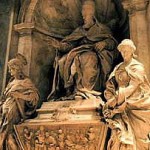 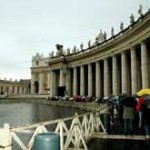 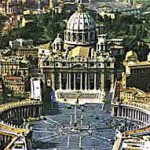 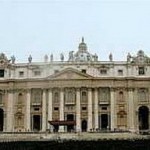 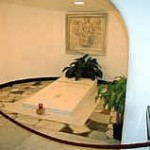