Traveled all night on the ship. Very restful sleep. The wave-rocking is peaceful. The seas were actually rough. I am on a lower deck just 3 or 4 meters above the water level and so the waves were crashing against my portal all night, but I love the rocking along with the sound of wind and water. It reminds me of my trailer in the desert rocking in the wind. I was surprised that I did not get sea sick. God, I remember my first trip across the English Channel on a ferry boat one horrible night in January. I was sick to death by the time I reached France. At any rate, got up early this morning, ate and left the ship by 6:45 AM and boarded a bus at the port of Kusadasi in Turkey and was driven to the house of the Virgin Mary and then to Ephesus, the site of ancient Greek ruins. Kusadasi and Ephesus are situated in the Anatolia region of Turkey. It is an area with a lot of significance for Christianity.

This is my first time in Turkey and I am pleasantly surprised. What I see is a clean and well organized developing country. I expected squalor and filth, but I did not see it. I asked our tour guide, a Turkish girl, if the rest of the country was also clean. She said it was because in the last twenty years Turkey has been cleaning up; it is apparently not like it used to be. I was told a similar story by an American traveler I met back at Stonehenge who had been in the Istanbul and Constantinople areas. If this is true, then the Turks are doing a good job! Turkey is preparing to join the European Union and so I am sure the cleanup is part of this plan. I will definitely return to Turkey.

Turkey has mostly a Muslim population, but in spite of this, it is a democracy and a secular state. Our tour guide, a woman originally from Istanbul, was proud to tell us that of the 51 Muslim countries in the world, Turkey was the only one with a true democracy. Walking in the streets of Kusadasi, which is admittedly a resort and port city, and therefore I am sure more secular, I do not see any evidence of this being a Muslim state. The women, as far as I see, do not wear head covering in the streets, but I am sure they do in the Mosques. I had a good chat with one lady who was selling Turkish jewelry in a shop near the port terminal. She was clean, well dressed, educated and straight forward. I learned that Turkish jewelry is made only with 24 kt gold. I was amazed. Now I want to buy some of that Turkish Jewelry, and Anna, you know how expensive my taste can be!

I do notice that many shop keepers in Kusadasi think I am Jewish because of my shikha (top knot). Being Jewish in a Muslim country, even a secular one, does not excite me. I will probably wear a hat next time. Unfortunately there was little time to spend shopping, but I did manage to buy a set of zils in a belly dancing shop, just for fun! I feel like the guy in the movie, Defending Your Life. On a cruise you are moved from one activity to next, from one place to the next, with hardly anytime to relax, and the only compensation that you get is that the food is great! Regardless, I will return to Turkey. This was just my first taste and overall I was impressed. 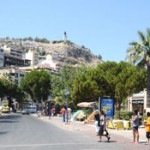 Kusadasi, the streets are clean and well organized 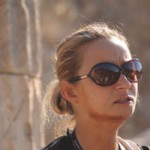 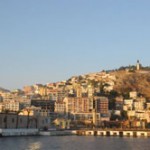 First shot of Turkey from the boat 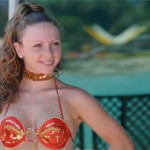 Goodbye, from Turkey. In Kusadasi every tourist is given a goodbye photo with a belly dancer.