The house of the Virgin is powerful. There are only a few places that truly reach out and touch me, and this is one. There is a story that Saint John brought the mother of Jesus to this place during her final days. For a time John lived in Ephesus not far from here. This is the place where she apparently attained ascension. This makes the site a kind of Samadhi shrine like you find in Vrindavan. The site has a controversial history because it was only discovered in recent times during the 19th century. Following the details outlined in a vision of an 18th century German mystic, this place was discovered by a French pilgrim. The Christian communities in the Mideast, of course, condemn this place as a fraud. They have their own site for her ascension. The Roman Church, after carbon dating the original foundation and finding that it indeed does go back to the first century, and then along with other textual evidence and local traditions, has accepted this place as an official pilgrimage site. Many popes have visited the place, even the current one. Regardless of whether the site is genuine or not I felt the sanctity and pull of this place. A lot of this may simply come from the pilgrims themselves. I now have three strong “pulling places” all connected to the Virgin: Notre Dame in Paris, Santa Maria Novella in Florence and the house of the Virgin here near Ephesus in Turkey. My attraction to these feminine sites of pilgrimage is indicative of a major shift in my religious mood over the last decade. I have moved from the male to the female.

Is this place her actual final home? God only knows, but for pilgrimage purposes it does not matter. The feelings are here and that is what matters. Like most places you cannot take photos inside, but I can tell you that it is plain inside with just a few photos of the Virgin and a simple wooden altar at the front. The walls are stone and there are lamps mounted throughout with candles burning. The air is filled with incense and atmosphere is serene and meditative. I sat on a simple wooden chair for a few minutes and took in the ‘airs’ of this room. I felt “home,” like sitting in the lap of my mother as a child. (Analyze that!) What I was interested to hear, and not surprised, was that even in pre Christian times the cult of the Mother Goddess was prominent throughout the Anatolia area of Turkey. This is evidenced by the ancient goddess Kybele (Cybele) being associated with the famous temple to the Goddess Artemis, the sister of Zeus at Ephesus. I will come to this shortly. Clearly the sentiment of the people towards a feminine divinity in this region simply shifted from the pre Christian to the Christian version of the same form of worship. This is natural. The archetype of Mother permeates human consciousness and easily shifts in its ethnic and local manifestations. So to move from the archaic form of the deity as Kybele and then into the Greek goddess Artemis and then into a Christian manifestation is not surprising. For reasons that are not yet clear to me I am emotionally drawn to this feminine form of worship. I started out in the “Father” mood and now I have shifted to the “Mother” mood. Given my Protestant background, I find this unusual.

When I travel to religious places, irrespective of what the religion is, I cannot help but fall into the mode of a pilgrim. As a dog cannot help but wag its tail, I cannot help but be religious. If I can, I always attend a mass or take the Eucharist when I am at a church. So while here I lit two candles and tied a strip of “prayer cloth” to a nearby fence. The purpose of doing this, of course, is to leave a presence. I want to remain in the lap of my Mother. I also took a sip from the healing fountains. This is like taking a dip in the waters of the Ganga. 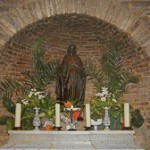 Inside the house of the Virgin 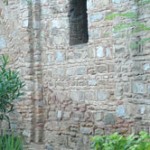 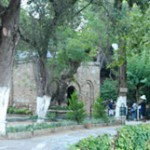 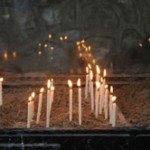 Candles lit at the home of the Virgin Mary 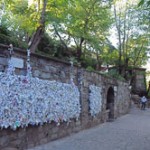 Cloth ‘prayers’ at the home of the Virgin Ephesus Turkey 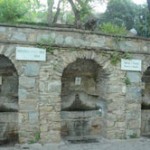 The healing drinking fountains at the Virgin Mary’s home 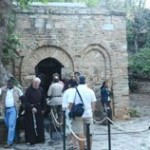 Entrance to the house of the Virgin Ephesus Turkey