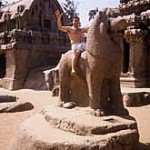 Now I am alone. I purposely left Gaur in order to be alone. I have to become confident in moving around in the country. When I go with him, he dominates and I never learn to do things myself. He wants to go to Kovalam and body serf for a week. Kovalan is a great beach, but it is full of nude European women. It’s a hippy scene. I’m not into it. I’ve got work to do in Vrindavan. I can’t waste my time bathing with naked women. I also want to see Toshan and Bhurijan and discuss with them the things that I have discovered in Bengal. So I decided to go from Madras to Mathura by train (36 hours trip). I’ll spend a few days in Vrindavan and interview Shrivatsa and Vishvambar Gosvamis, talk to Toshan and Bhurijan, do some sadhana, have a rest, then go to Delhi, talk to some shastri people there, then fly to Bombay, spend a day there, then fly to NY. Should come in around the 25th. 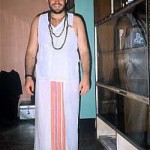 I may have to stop in London unless Air India lets me go all the way. I have a separate ticket which by strict law would make me stop in London, then rebook for NY, but I’ll try to bypass this formality. I did this last year. Today we visited the Parthasarthi Temple in Madras, fabulous. In this respect Gaur is the best. We get into places that I could never enter on my own. He is expert. He is just too much in the mode passion. He wears me down. The guy needs a wife like anything to cool him down. But he’ll be a hard catch. He loves to roam. Anyway, one day the right girl will come along. It will be good for him, but pity the girl she will have to be as tough as leather to handle him. 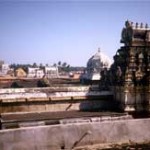 I can see this trip to Delhi is going to be hellish. I’ve got a compartment with a westernized Delhi couple. The woman’s a real hotty and she can’t keep her hands off the guy. I don’t need that type of agitation. Oh dear, such austerity. Apart from having your company, I’d just like you to see what I am seeing. In the south Vaishnavism is completely different than in the north, fabulous architecture and sculpture. Grandeur on the greatest scale. Vrindavan is old and run down and filthy. It’s very hard to appreciate. But the Shri Vaisnava situation immediately holds the mind and makes one feel good for being a part of this culture. Personally I consider Shri Rangam and Tirupati as much as a part of my spiritual life as Vrindavan. Shri Vaishnavism attracts me. I’d like you to see it at least once. When you come to Shantiniketan I will take you to Madras and Tirupati. You must see it! 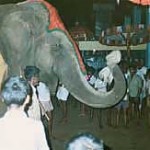 This trip so far has been highly successful. I’ve done what had to be done on TBV. There is much more. I could spend a year in it researching in Bengal and Orrisa. But at least if the situation does not allow us to return, I’ve got enough information to present a good study of TBV. Evening is coming now. The terrain is flat in the distance. I can see the factories around Madras. There’s not a cloud in the sky only the golden hue as the sun sets. I’m feeling a little homesick. What are you doing? And the kids secure? I’m so far away. I’m in such a different world. I have seen things which you could not imagine. As Krishna has looked after me so I am sure he has looked after you. Every night I never know where I am going to sleep or how I will eat or how I will travel. But every night I sleep and everyday I eat. Sometimes it is better or less than the previous, but always Krishna looks after me. I rely on Krishna. Traveling creates this kind of reliance, but the same dependence on Krishna applies even when one is not traveling. You just notice more when you are traveling because you are more vulnerable. Difficulties come and go, pleasures also come and go. Sometimes the train is early and sometimes it is late. Sometimes the train is on time and I go first class. But in all cases I get to my destination by Krishna’s grace. And even if I don’t and he takes me somewhere else, it turns out for the better. The same logic applies in New Vrindavan.