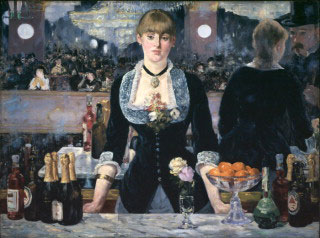 Edouard Manet, 1882 A Bar at the Folles-Bergère

The Courtauld Collection of French Impressionism at Sommerset House, London* 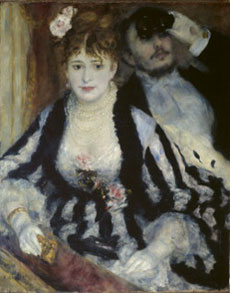 Somerset House, just off of the strand in London, is a wonderful collection of 19th century French Impressionism. There are painting by Manet, Monet, Cézanne, Degas, Pissarro, Gauguin, and many others. I am sure Sommerset House was mentioned in my DVD Teaching Company series, but I only paid attention to it during my bus tour of London. But what a gold mine!

I think between the D’Orsey in Paris, plus last years Vullard’s visiting exhibition in Paris, plus the two collections I have seen here in London, I have seen a major portion of French Impressionism. I’m on my way to becoming an expert! lol And to think this art was considered pop culture and ‘hippieish’ during its time. I took photos of everything I could and when I return home I will re-watch the DVD series. 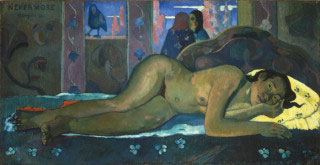 A part from the excitement of seeing original art, I was most interested to see some of the letters Cézanne wrote to a female colleague. These letters really give a slice of Césanne’s inner life, his hopes and dreams, his pain and despair, and his mental condition. He suffered depression. To me this was as interesting as the art itself. In my work in India during my dissertation what a joy it was to find the original letters of Bhaktivinoda and to read his biography from his own hand. I leaned that things that we consider ordinary and unimportant, like the rise of the internet or the beginning of the space age, will in years to come take on new meaning. What a pleasure it was to read about the first telegraph or gas street lighting coming to Calcutta. I learned the power and historical value of letter writing. This is why I write these travel logs and other installments. I know that someday descendants or scholars may discover these letters that I write. Those who create and record a history have a history.