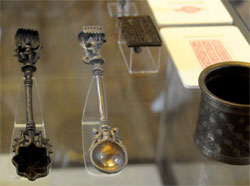 A Saturday afternoon in July is not a good day to come to the British Museum! The place is swarming with visitors. In the National Galleries and Somerset House I at least had a chance at getting a handle on what there is to see, but here in the British Museum the place is so massive it is impossible to grasp. The audio self-guide is hopeless, not because it is poorly done, but simply because there is just so much and it only addresses a tiny fraction of the collection.

So instead of trying to see everything I decided to make the money exhibits my target. It is a relatively small room that covers the history of money from kind, to coin and paper money, and then to plastic and even electronic currency. Coins, for obvious reasons make up the bulk of the collection, but since I have no training coins do not interest me. However, the exhibits describing the manufacture of coins and paper money was interesting, particularly in regards to security and forgery. Electronic and plastic currency were the most most interesting of all. A simple thing as a credit card is amazing. Many even have computer chips built inside of them. I always wondered about that spot in my AMEX card. 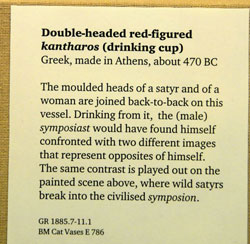 Later I went through the ancient Greek and Roman domestic life exhibits. I like to see the details of peoples lives, the kinds of utensils they used, their implements for grooming and beauty, their furniture, and so on. In the end I took a walk through the Hindu and Buddhist collections. Greek and Roman religions remind me so much of Hinduism. For me it is simply the same thing in a different bottle, although I do think that Hinduism has a more advanced theology, which is perhaps one of the reasons that Hinduism is still alive and well. It was amusing to look at the Hindu and Buddhist puja bells, spoons and cups in the glass cases. For me I use these things in my daily life! I have these things in my living room. In the museum Hinduism looks dead, but for me it is alive, well and kicking. 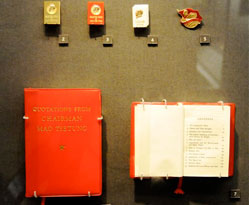 It is simply not possible to know the details of even a faction of what is here in this glorious place. The collections are massive. I would need many many trips here to even begin to take in what is here. The most obvious and the most general thing I can say is that there seems to be no end to the ways human beings perceive reality and build their cultures. This is what I have learned from coming here and seeing in one concentrated place so much human history and diversity. I think, after all, it is good to be human. We are an interesting bunch.

After the museum I went back to the streets. Downtown London is another kind of museum and it is also packed. It is a Saturday and again not a good day to relax in a cafe, but certainly a good day to see what goes on in downtown London on a Saturday in July. I have actually gotten rather good at getting around. An English speaking country is easy.