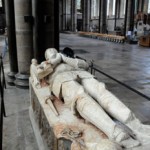 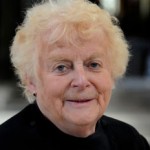 A Priest of Salisbury 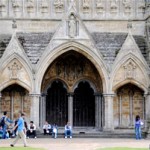 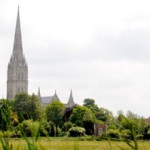 View of Cathedral from local park 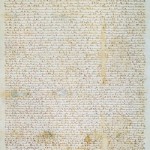 Today, I took a first class train to Salisbury from Heathrow to see the Cathedral and stonehenge. During the trip I had a table where I could write these notes. First class is the only class if you ask me! Later I will take a first class train to Paris that will also include a typing table and power for my computer. How wonderful!

The English country side is beautiful. What a relief from the deserts of southern california. Green clean and well attended to. England is a beautiful country and for all the gripping in the states about the failures of the British health care system, the people look much more healthy than Americans. Britain is outrageously expensive yet the people are spending money. There seems to be no shortage of cash. Gas is about $9 a gallon and yet the cars are modern and there are certain plenty of them. There are very few beggars on the streets, unlike like Paris or LA. I wonder why? I also notice that London seems to have no trash cans and what with the British being all proper and clean, this is strange. The answer of course is security. Public cameras are everywhere.They are even on the buses and trains. You cannot move in this country without someone watching. Anti terrorism is the name of the game and yet I have been into all the churches and other public buildings without a security bag check. The only exception was the London “i.”

The Cathedral at Salisbury is somewhat on par with Chartres Cathedral near Paris, both are outside a major urban area, both are old and both are grand and historic, although Chartres, in my opinion, is a cut above. Ornamentation and embellishment is where the difference lays. The detail in the stone work and the extent of stain-glass puts Chartres in a league all its own. Nonetheless the Salisbury Cathedral is worth seeing. Its construction started in 1220 AD, whereas Chartre was started even earlier. At first I thought the difference between Chartres and Salisbury lay in the fact that Salisbury is Anglican while Chartres is Catholic, but this of course it not true because Salisbury was built well before England became a non Catholic country. This is one old building!

What was exciting and most unexpected was seeing the Magna Carta. I did not know one of the four original copies of the Magna Carta is kept here. Unfortunately, like most good things they will not allow photography so I can only show a web derived photo, but it was exciting to personally see such a document. In essence the Magna Carta is the first documented attempt to create a legal means to limit the powers of government and guarantee the rights of citizens. The abuses by King John (1166-1216) caused the revolt of his nobles to compel him to recognize the rights of both nobles and ordinary folk. It established the principle that no one, including the king, is above the law. There are only four extant copies of the Magna Carta and the one I saw in Salisbury is dated 1215 AD. I consider the Magna Carta to be not just a legal and political document, but more importantly a spiritual document marking the growth of human consciousness. For me to come here and personally see this document puts me in direct in touch with the spiritual development of humanity. Afterwards, I had the pleasure to speak to one female priest of this grand cathedral, who was concerned with human rights, namely that her church still does not allow the full ordination of a female priesthood, or the ordination of homosexual priests or the performance of gay marriages. The Anglican church as well as my other religions organization are divided over these issues, yet how ironic is it that such a document as the Magna Carta was enshrined just a few feet way from where we were discussing these basic issues of human rights. It was interesting to have some shop talk with a fellow priest on this trip.

As far as the cathedral itself is concerned it is a living church, but only barely so. I noticed that it has a lot of bodies buried in the church floor even at the entrance way. Old Christian churches seem to do this a lot, bringing death and religion together. Every church has at least a graveyard out back and big ones such as this even have crypts in the basement for dead VIPs. Here in Salisbury the water table is very close to the surface. Someone even showed me this by pulling away a floor tile and inserting a ruler. Water appeared at about four feet down. That is not much for a building of this size! The cathedral is floating? I am also told the spire is off center by half a meter. The tour guides said the town of Salisbury and the cathedral in particular was never bombed during the second war because German pilots used the cathedral as a landmark for navigation as they crossed the channel heading for London and other places. Apparently the British spitfire was secretly built in this area. All in all Salisbury is a quiet and restful location and well worth a visit, but of course the real attraction to Salisbury is not this grand cathedral or anything to do with Christianity; instead it is about another temple and a much older religion, Stonehenge.