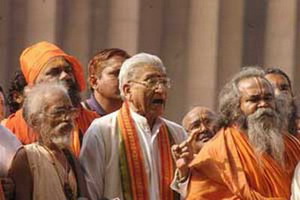 Last night I gave the opening invocation at a meeting of the VHP in the Swami Narayan Temple in Norwalk CA. The guest speaker, Ashok Singal, was the head of the VHP in India. Every temple in Southern California was represented. Of all the priests who could have made this invocation, they asked the Western American priest. I am not certain why. I certainly get to appear in some interesting places. The politics of religion is not something that I enjoy. I will likely avoid these gatherings in the future. Perhaps the Indian priests know something that I do not!

Ashok Singal presided over the destruction of the Mosque at Ayodhya in the 1990s. I remember this event only too well because the temple in Placentia, where I was the priest at the time, was threatened and I had to go to the local police to ask for extra patrols. Those were tense moments and I felt personally in danger. You would think that being a temple priest was a simple and peaceful occupation. Not so. The religious emotion touches the essence of the human heart and therefore can be a most creative and wonderful experience, or a most destructive and devastating force. A priest sits at the heart of this primal human emotion.