Today at 3:44 AM SpaceX, a private and commercial company, successfully launched its first rocket with a payload headed for the International Space Station. This is an historic flight comparable to the Wright brothers flight. I am declaring it Dragon Day, named after the space capsule, Dragon, that is being put into orbit. A few years ago I noted the first successful rocket launch by this same company, SpaceX, of a test capsule just into space and then back down again. That was also an historic event and now today a few years later this same company is actually taking its first commercial payload to the ISS. Before this I have severely criticized President Obama for his neglect of space. I thought it was an absolute travesty that this country could no longer service the ISS and we had to rely on other countries, most notably the Russians, to service our interests in space. I can see now it was actually a good strategy to turn routine space work over to private companies. So with the expertise of NASA combined with some government and private funding this routine work of servicing flights to such places like the ISS is being successfully turned over to private companies. It still remains to be seen whether this particular rocket launch can successfully dock with the ISS, but it is just a matter of time before such a docking can take place. I certainly hope this particular rocket launch is a successful docking mission. Yes indeed, let NASA utilize its expertise in cutting new ground into space exploration and let routine things be turned over to private interests. I now clearly see the wisdom of such a policy.

So sitting in the John Wyne airport waiting for a flight to San Francisco, I’ve just received the good news the docking with the ISS was successful. This is the beginning of a whole new industry.

What a fantastic time of history to be living! I have seen the development of television, cellular telephone, the Internet, space travel and now the first commercial spaceflight within my lifetime. But more than anything else I am waiting for the discovery of extra terrestrial life and some form. Will I ever see such a thing? 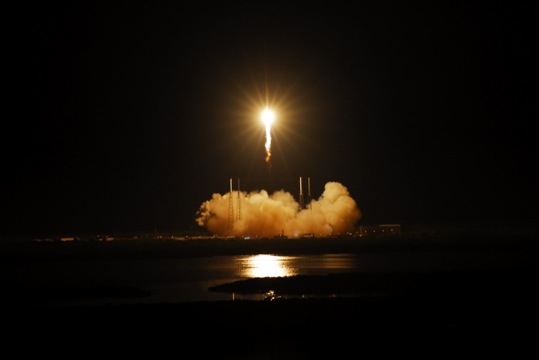