04/29/12
Eastern Ontario in Canada where I grew up boarders on the Canadian Shield. During the last ice age huge glaciers, hundreds of feet thick, descended across North America covering this area of the country. When these glaciers melted they left behind thousands of freshwater lakes so now the whole of this region is peppered with these lakes and today one can take a boat and travel from lake to lake to lake seemingly without end. This is called portage, and the best boat in the world for this type of travel is the canoe.

I cannot remember how old I was, but at least from 12 years, my cousin Kenny and I would take these portage trips. We would almost live in our canoe during the summers. At first we just took overnight trips. My father or my Uncle Jimmy would drop us off on the side of a road near one of these lakes along with our boat and gear and then pick us up at a prearranged time the next day. As we became better at wilderness skills and our parents became more confident of our ability to stay alive, these trips would extend for two nights, three nights, four nights and eventually for a week or more. In those days there were no cell phones or gps–all we had were topographical maps and a compass, and once in the bush we would seldom see a soul. Canada was a sparsely populated country back then. Thinking back I can hardly imagine that our parents let us do this. All we would have is our sleeping bags, a tent, some tarps, our fishing rods and a few cooking utensils and, of course, our canoe. We lived off the land, fishing for food and drinking water directly from the lake. This is almost inconceivable now!

Each lake might take a few hours to paddle across before we came to a small land bridge that connected to the next lake. We would then carry our canoe and gear perhaps for a quarter of a mile, but never more than a mile. From there we would do the same to the next lake. This was portaging andlake by lake we would gradually move ourselves miles into the bush. In the evening before nightfall we would stop, set up our tents, light a fire and spend the evening on the shores of one of these lakes. The solitude and the beauty of the bush was unforgettable. We would often see deer, wolf, moose, bear, beaver, lynx and many more animals in their natural habitat. I cannot describe how much I enjoyed this experience. We hardly ever had trouble with the animals except I can remember one night waking up to the sound of our tent being ripped open and in the dim light of a flashlight seeing the huge paw of a bear ripping through in the dark. Kenny and I blurted out a primal scream at the top of our lungs. We thought we were in real trouble, but somehow our hysterical scream scared the living daylights out of this poor bear and in the dark we heard him thrashing through the bush as fast as he could. I’m sure he’d never seen humans before. These kinds of things happened only rarely, but when they did they remain indelibly etched in your soul.

There are two residents of this northern Ontario lake country that I still miss today, the loon and the wolf. A loon is a waterbird like a duck that I have only seen in the northern bush. There is no sound that can even remotely compare to the eerie and laughing cry of the loon echoing off the misty waters of a northern lake at dawn. And once you have heard the haunting howl of a timber wolf on a full moon night, and felt every hair on your body stand on end, you will never forget the mystical experience of the northern bush country. Today, living in my new country in the American west, I still long for the solitude and the remoteness of those youthful days. So I seek the deserts of California. There may be no place for the canoe in this waterless world, and the color green may have been replaced by an all pervasive brown, yet I still find solitude, remoteness and peace in my new home. Even though I no longer hear the haunting howl of the wolf still my hair stands on end when I hear the laughing loon-like cry of the coyote. My new world is also a mystical world. 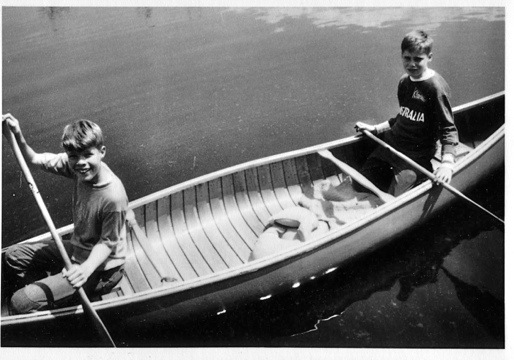