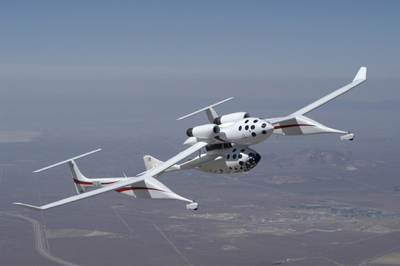 I remember how Bhaktivinoda described the first installation of gas street lighting and the introduction of the telegraph in Calcutta. To read about these historic events in the pages of his autobiography (Svalikhita Jivani) was fascinating for me. Today I witnessed my own piece of history, the successful flight of SpaceShip One. This was the first privately funded flight into space. Spaceship One taxied down a runway in the Mohave desert at 7 AM near where I live and traveled 65 miles into the heavens to just touch the limits of space and then returned successfully back to earth.

For this feat the project members won a ten million dollar prize awarded by one of the founders of Microsoft. As much as this first space flight was significant, it was no less significant that I watched this flight in streaming video on my computer over the internet through a wireless satellite connection. I am sure that history will look back and judge this space flight, and even more so, the rise of the internet as two most important developments in human history. The creation of the internet may be liken the invention of the printing press. As each day passes the internet becomes increasingly potent and indispensable. In my life I have witnessed the early space programs by Russia and America as well as the first moon landing. And now I have seen the beginnings of commercial space flight. These are great moments in history.