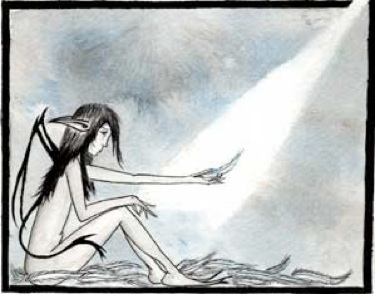 As a youth growing up in Toronto I became involved with the Hare Krishna movement and in so doing I unwittingly put my mind into a box, the box of medieval Vaishnavism. You can debate whether my involvement in Krishna Consciousness was a good thing or not, but in either case it turned out to be much more than I could have foreseen and there came a time when it was necessary to free myself from this box. The rationale for my decision to leave the box will become apparent as this writing proceeds. For now, however, I will begin to discuss life within the box called Krishna Consciousness.

I have described Krishna Consciousness as “old time religion.” This, of course, is the framing of a Hindu religious tradition in Christian terms, but I think the characterization fits. More precisely Krishna Consciousness is religious fundamentalism, which is the interpretation of religious scripture in literal terms. It is also religious evangelicalism–spread the word and save the world. Chanting in the streets of Toronto, the devotees were taking the direct word of God to the “fallen souls” of Toronto in an attempt to save them. This is precisely the same thing that evangelical Christians do and what was been done by missionaries the world over throughout history. The Hare Krishna movement is nothing less than a Hindu missionary organization. We often hear about “born again” Christianity. In this country a large segment of Christians profess this form of Christianity including the current president of the United States, George W. Bush, and many of his predecessors including Presidents Charter and Reagan. Krishna Consciousness is nothing less than “born again” Hinduism. All you need do is change the name of Jesus to Krishna and change the stories from Biblical stories to Puranic Hindu stories and you have “born again Hinduism.” The mental attitude is identical.

So what is it about Krishna consciousness that brings it so close to born again Christianity and other forms of religious fundamentalism? It is the doctrine that sacred scripture must be interpreted literally and that scripture constitutes the most comprehensive means of knowing, above even perception and reason. It is this single tenet that clearly defines Krishna Consciousness as a form of religious fundamentalism similar to born again Christianity, Islamic or Jewish fundamentalism and other forms of religious literalism. They demand that you surrender your mind and emotions to an external ideal or power. In effect you temporarily shut down your mind and suppress your personality. In exchange you receive a discipline, a world view, and a way of life. You live in a clearly defined world and therefore you know precisely how to think and act. This is also the case when you surrender to a political ideal such as marxism, or join a military organization such as the United States Armed Forces.

I consider my time spent in the Hare Krishna movement to be extremely valuable and yet extremely difficult. My years spent in this fundamentalist’s state of mind allowed me to touch some incredibly basic aspects of human nature and to come into contact with my own psychology and my own essence. In joining Krishna Consciousness, I received a discipline and distinct purpose in life. But I also entered my own heart of darkness and touched my passion. As arrogant as this may seem, I now have a better idea of my potential.

There is well known writer, Joseph Conrad, who wrote a novel entitled, Heart of Darkness, in which a European explorer, possessing a moral character and with the best of intentions, enters the darkness of the African jungle. Once inside the womb of the African wilderness he finds himself stripped of European culture and utterly alone with himself. He soon finds himself doing things he never could have dreamed of. In a similar way, my venture into Krishna Consciousness was my own journey into the African wilderness, into my own heart of darkness. I learned what tremendous evil, as well as what tremendous good, lies within the human soul.

Anna, do you know what ghee is? In English it is called clarified butter. Put a pound of 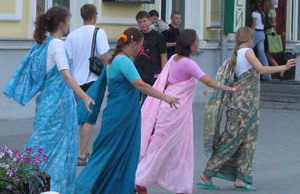 butter into a cooking pot. Turn up the heat ever so gently. Watch what happens. First, the butter melts and later it begins to pop and sputter, all kinds of impurities begin to rise to the top. Skim these impurities away and eventually you will be left with a pure and golden oil that we call ghee. This is clarified butter. The human soul is like butter. Turn the heat up by depriving a person of adequate sleep, food and sex. Isolate the person from his indigenous culture, remove all social barriers, minimize common moral values and watch what happens. You will be shocked to see what kinds of impurities exist within the human soul, within your soul. Now take that person, unlock their passion and focus it on a lofty goal. Watch the creative juices flow. This was Krishna Consciousness in the 1970s. Tremendous acts of creativity took place, as well as great acts of misplaced spirituality.

Shesha Marvin: I really enjoyed this article and I want to read more. I think it’s interesting that this it the most I’ve really of your writing. This post clarifies so much of the crap stuffed into my head as a kid. I’ve dated a lot of Christians and seem to attract them to my swing dances and lessons. In this association I’ve learned enough to really see how Christianity has imbedded itself into western Hinduism. Such ideas include the need to worship 1 all powerful god or the need to save souls via crusades and preaching tours. One of the happiest days of my life was the day I left New Vrindavana, the Hare Krishna farm community where I was raised. I prefer my freedom from the Box. I found NO value in having my answers to life’s questions given to me in a boxed set. (10/1/04, 8:45 PM)

Karnamrita Harbert: I only have one memorie from New Vrindavan, Cold marble flooring, and one hard bunk bed. I remember wetting the bed, waking up and feeling alone. I don’t think I was there long. Recently though I did take a trip to New Vrindavan hoping to gather some information about my past. People there remember Pita, and where curious to know what he was doing. I was not comfortable there at all, people there had a film of black to them, a greasy sort of feeling. Their eyes, lifeless. My heart pourd out to them and I wanted to save them from the madness. They were all cows following some unnamed master. I am glad I was not involed in that box for too long. (10/2/04, 10:20 AM)